In his 20 year career we have observed multiple Chris Brown Hair Styles which our editorial intends to highlight, discuss as well as rate.

Singing, acting, dancing, painting, rapping, writing, he does it all which makes it hard to place Chris in a box as his creativity supersedes him which would explain his mass influence. His creative nature also results in classic and experimental hairstyles.

If there’s one thing were certain about its his hairstyles will continue to change and evolve throughout time and our editorial aims to continuously document these changes.

As the saying goes “You only have one first chance to make one first impression that lasts a lifetime” which would explain why most people to this day associate Chris Brown in his low Buzz cut. We were introduced to him in the music video Run it with this style. 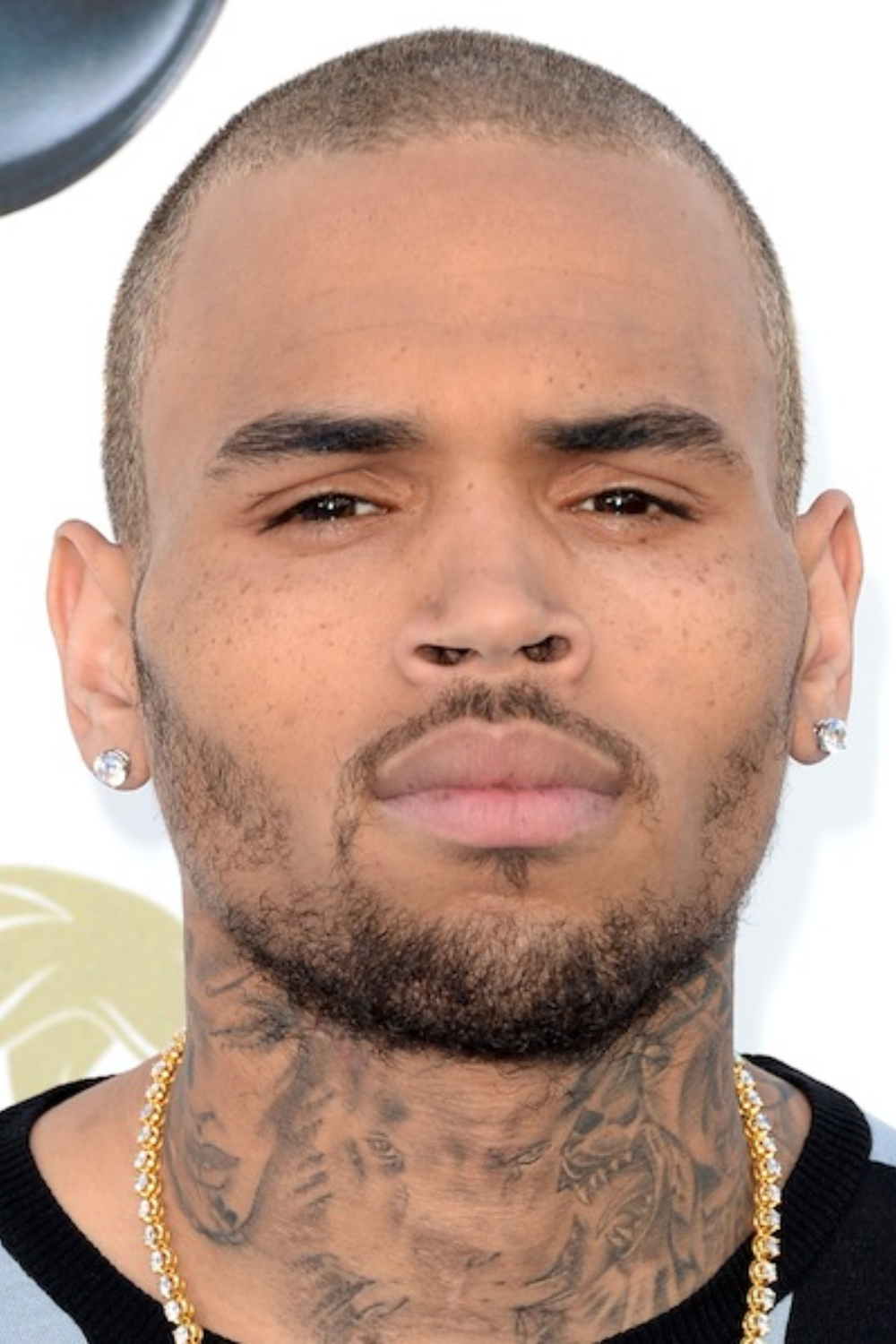 Since then we have seen Chris in a plethora of hairstyles from bleached hair, braids, twists, and curls yet he mostly reverts back to his buzz cut.

This may be the closest style we get to a signature look for the singer. 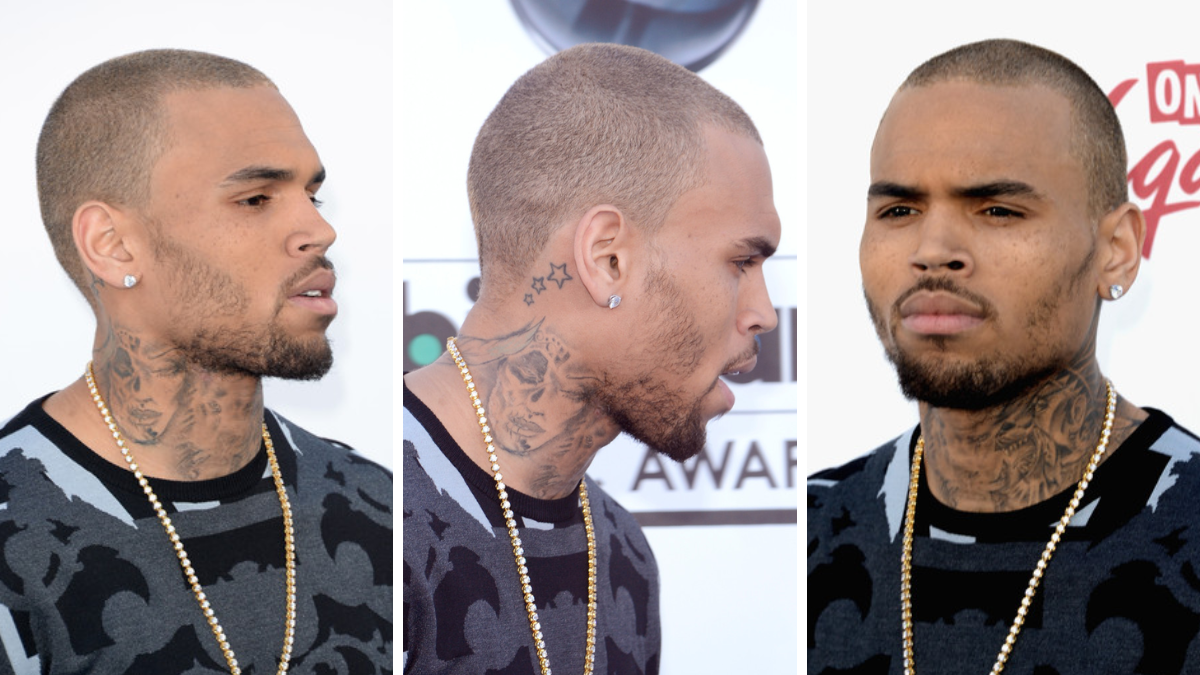 In addition to this we have seen his buzz cut styled in multiple different variations for example, bleached buzz cut and lines in hair.

GQ ranked him 4 out of 9 according in their Famously Bad Haircuts for the lines in his hair, we disagree!

Is there a hair colour Chris Brown hasn’t tried at this point? And yes, that was a rhetorical question. 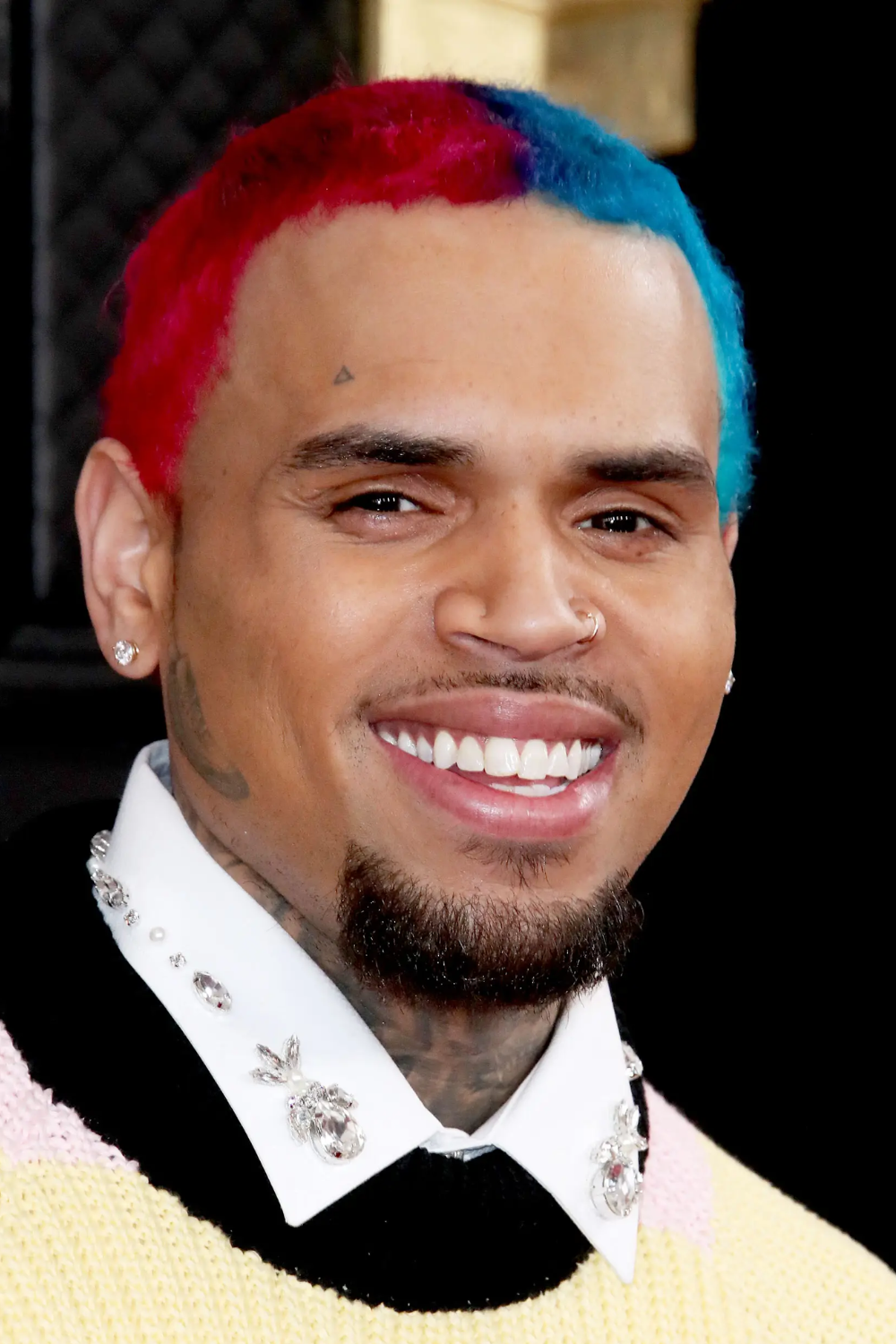 As we mentioned before his creativity extends far past his music and paintings, we get to see Chris bleach his hair to further express himself. Some of these we love i.e., the blonde and so of them were not too sure about i.e., the multi coloured dye. 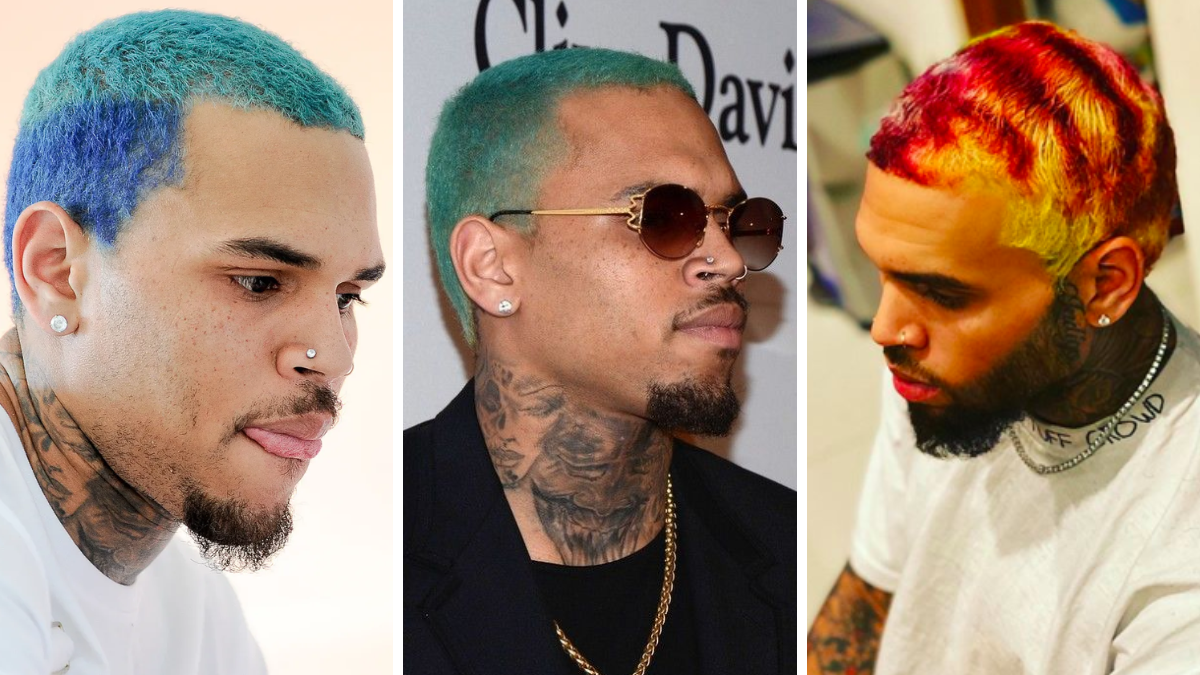 If you find yourself inspired by any of his bleached hairstyles and want to emulate them remember to see a hair stylist professional or colourist, trying to do this solo could be a disaster.

Since his hair type is a 3B-3C we often see images of the rapper in loose curls which create the look below. 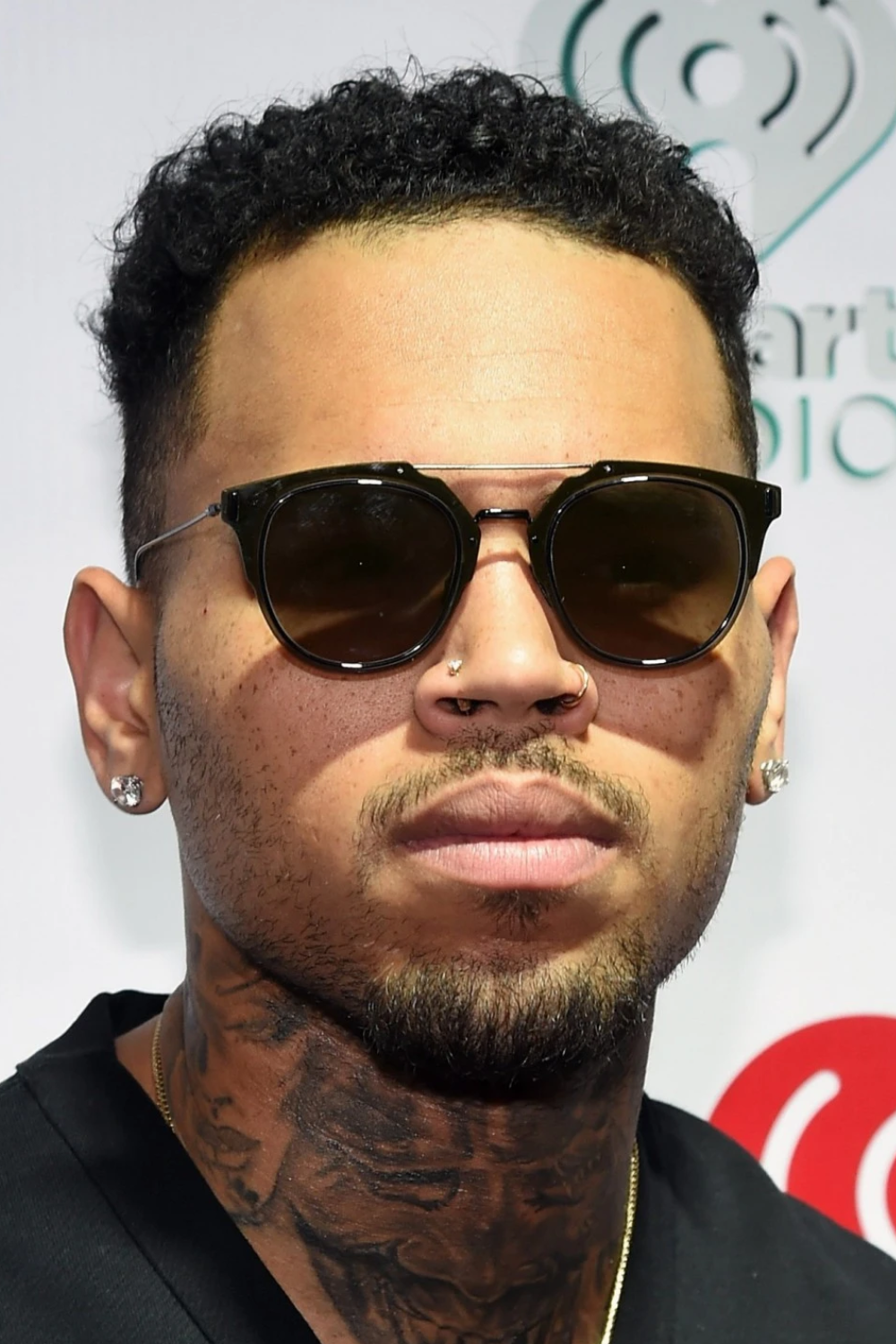 There are multiple variations of this style such as his high top faded curls with his sides completely shaved, tapered fade or curls across his entire head. 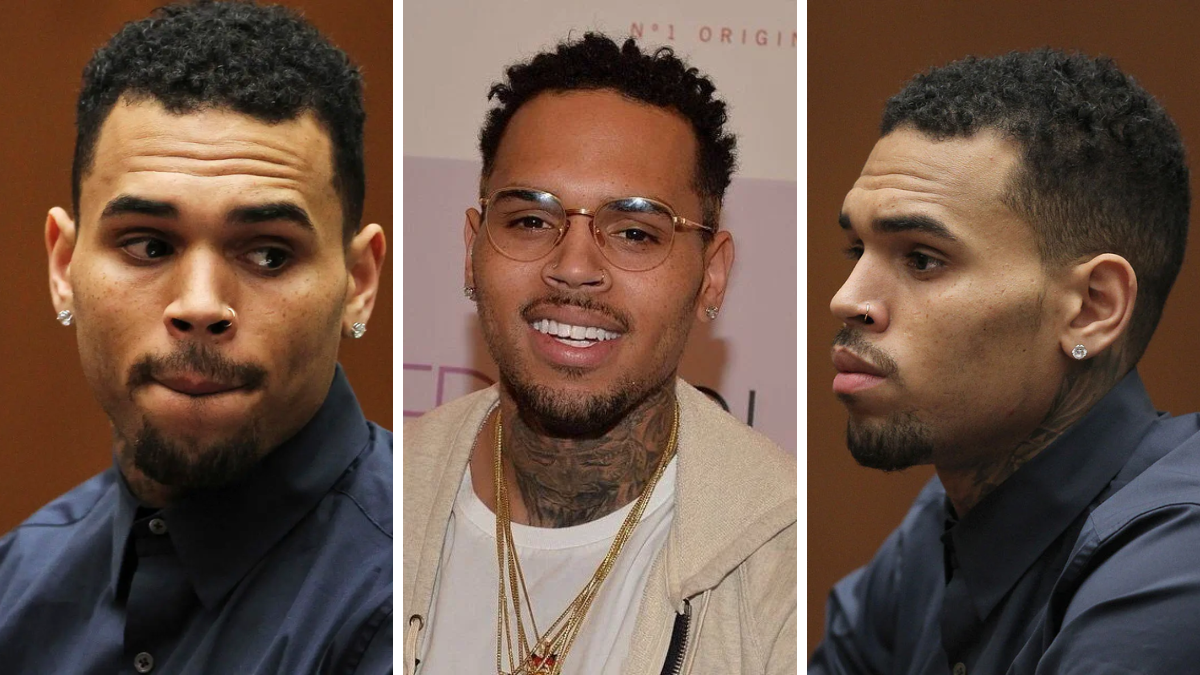 His curls become much more distinctive with the use of bleach in his hair. For example, we can see his curl pattern clearer when he’s sporting his blonde hair.

Both Hip Hop and RnB are black culture which therefore means some of the most prominent hairstyles worn by the artists include braids, cornrows, and dreads. 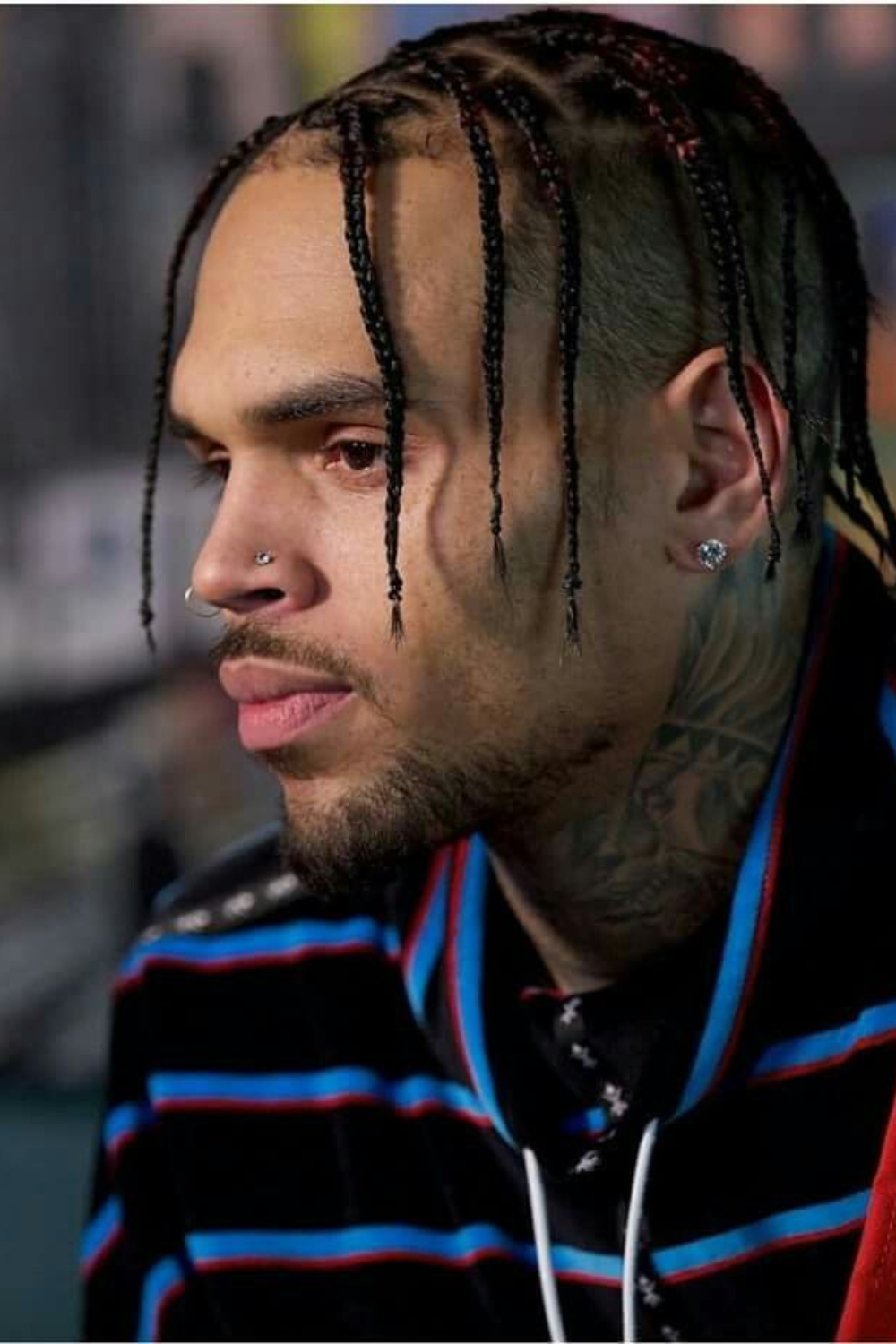 R Kelly, Omarion & Trey Songz braids are the best examples of this within the culture and were going to take an educated guess that this is where his influence came from or the countless number of rappers with braids. 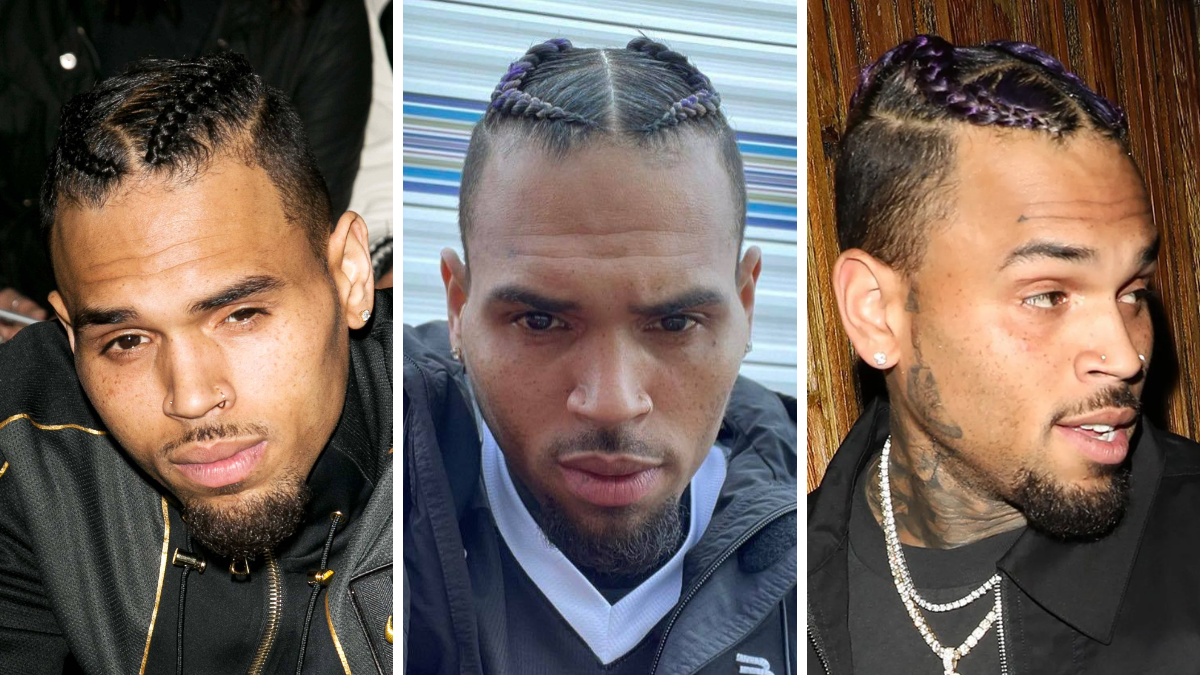 Regardless of his influence to style braids he did it effortlessly and wore it with shave sides a clear transition from his high top curls.

The short, back and sides will forever be a men’s classic with a long swept back top is the basic formula for success and Chris Brown got this right. 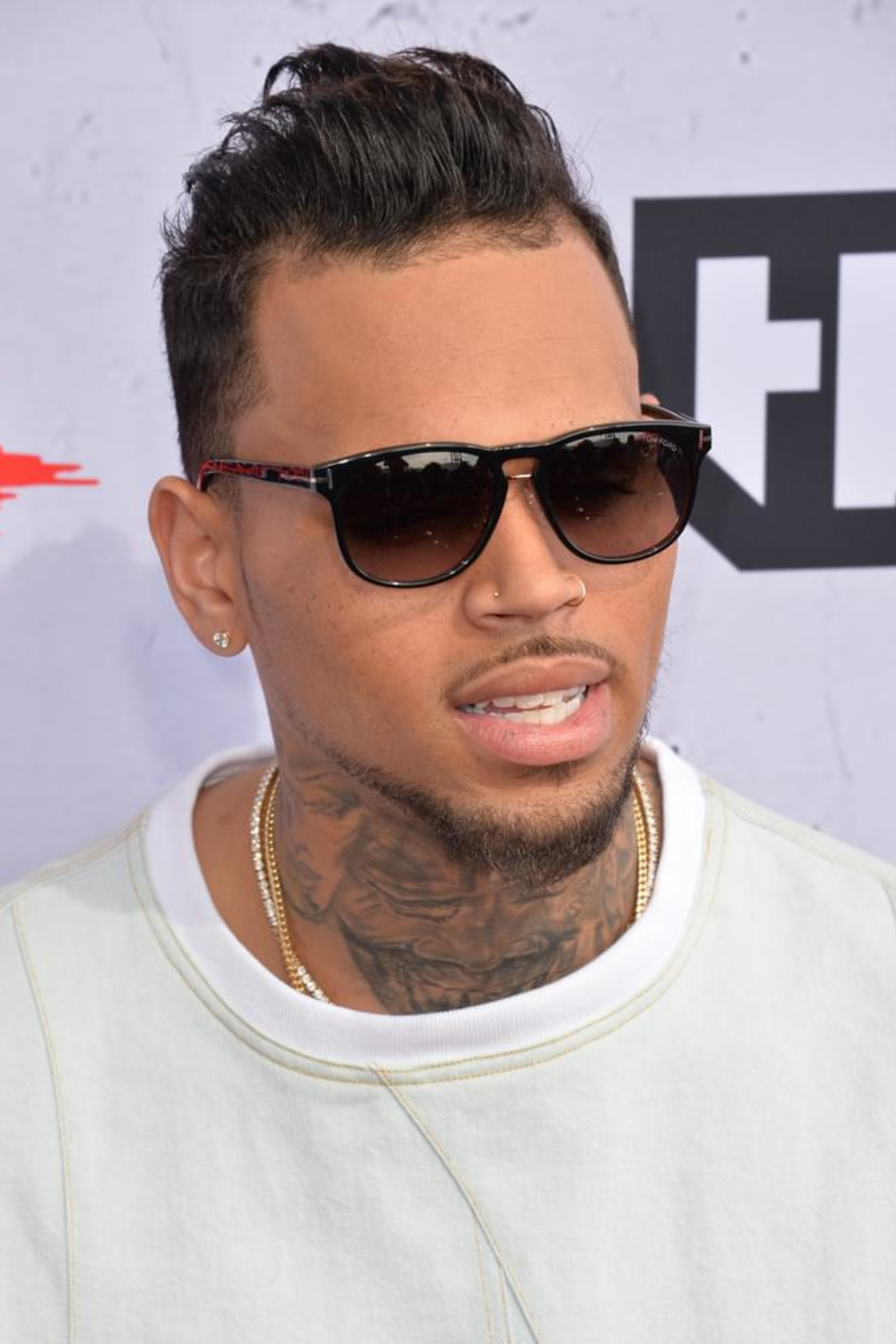 Again, we are able to really see his loose curl pattern once his hair has grown out further accentuating his curl pattern. 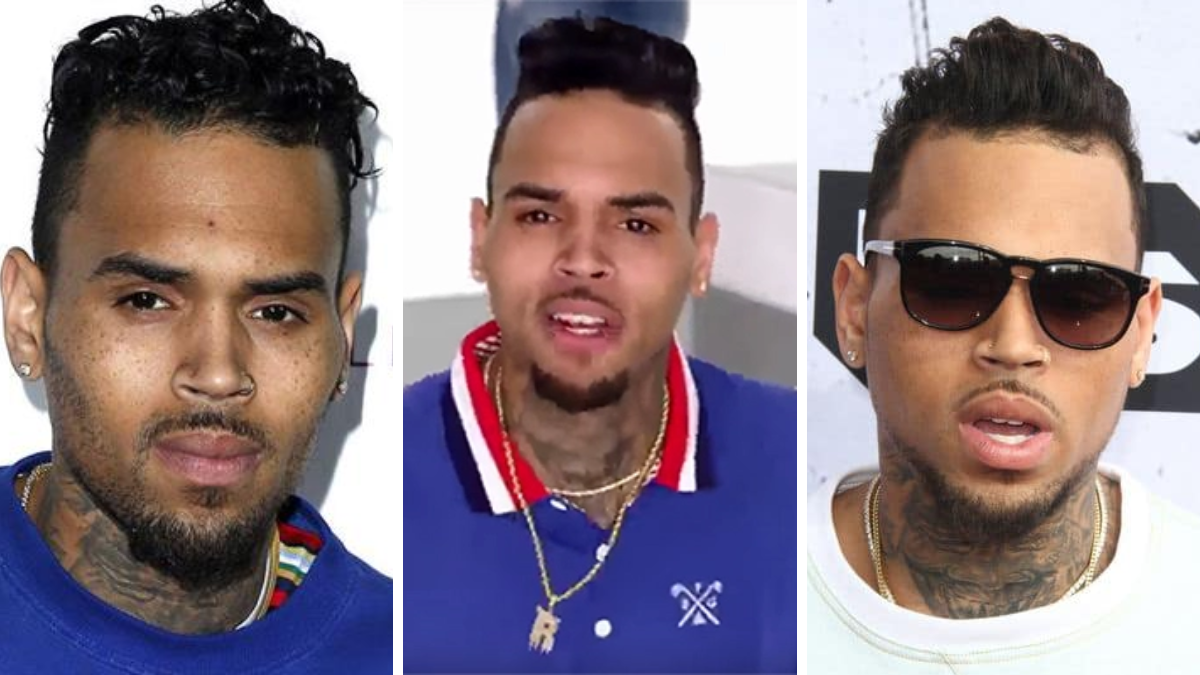 Modern variations of the Quiff see the back and sides taken quite tight, but this is a personal choice if you want to style your hair this way or not.

We must admit It can be hard to differentiate between the quiff and pompadour due to being similar in appearance, however as a rule thumb pompadours are bigger whilst Quiffs are more subtle, understated and often worn on the sides. 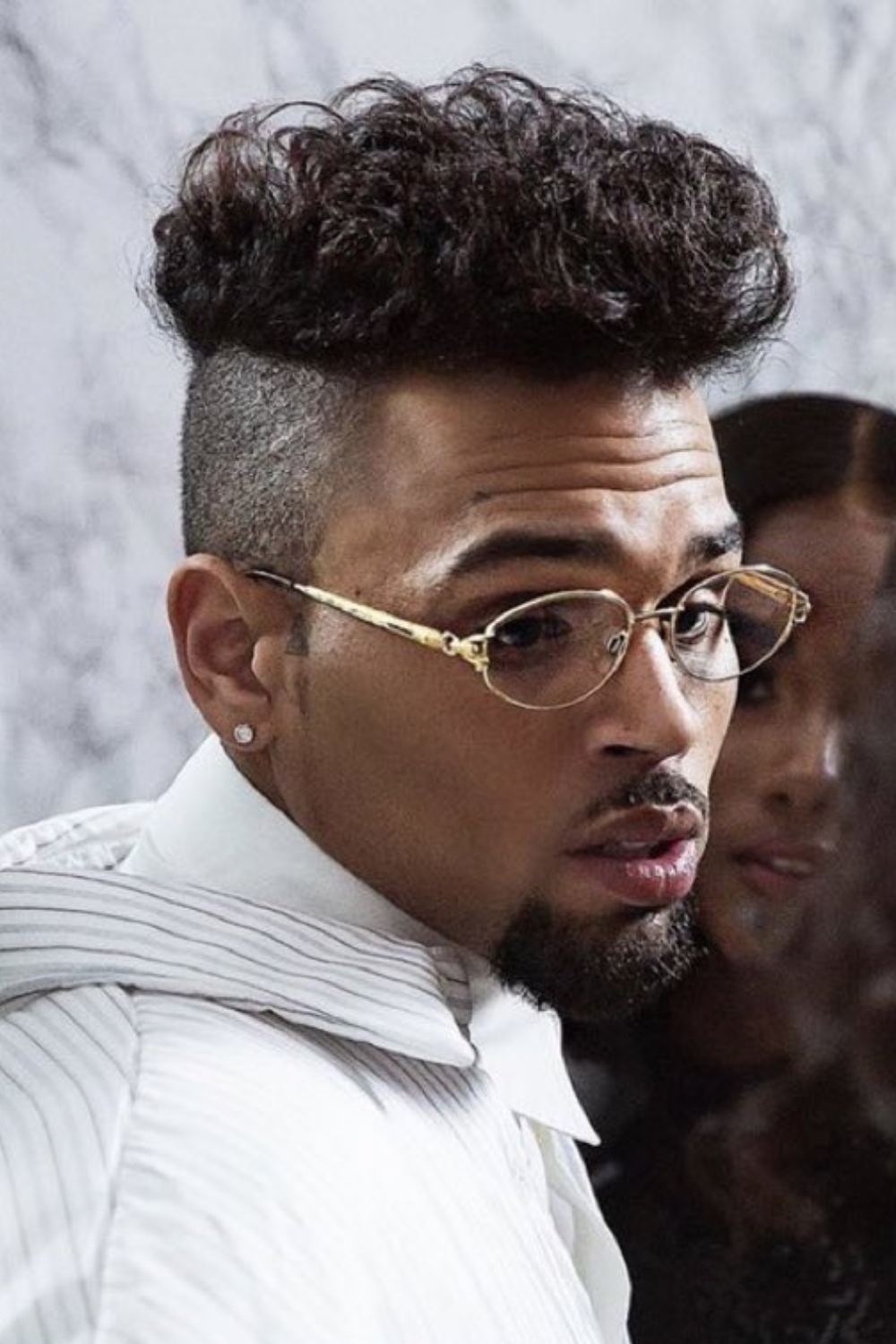 With that out of the way we can see Chris Brown in one of his most experimental looks, the pompadour and were not sure how we feel about this. 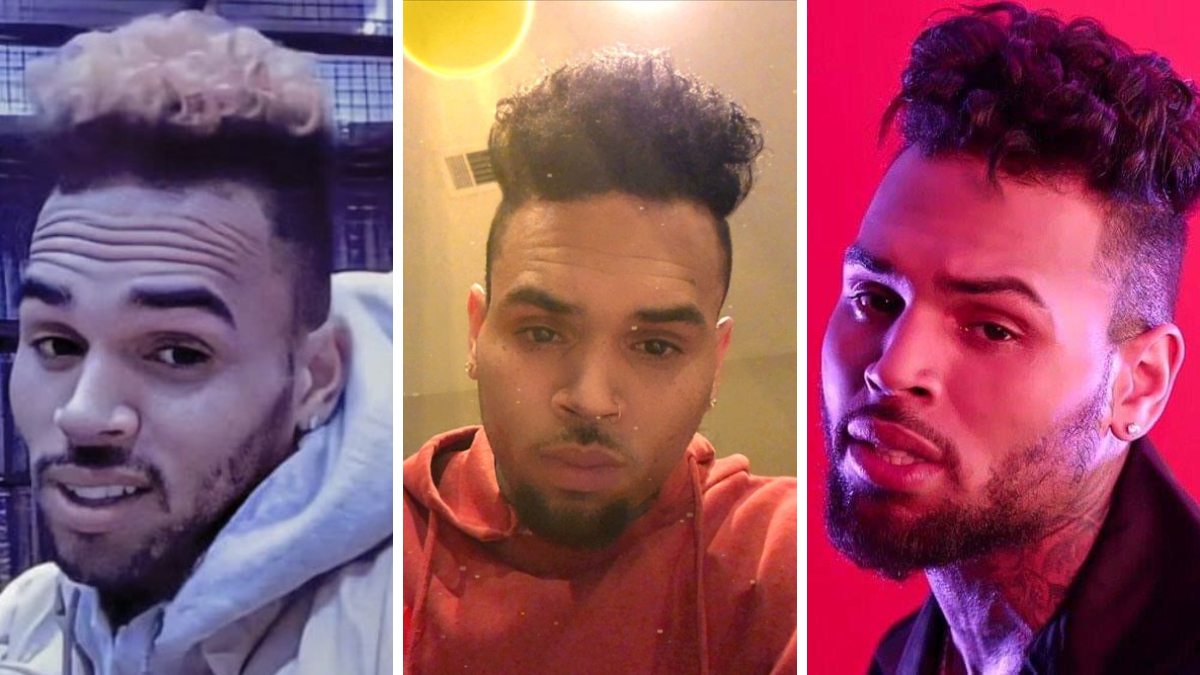 We also haven’t seen him style his hair this way in a long time so its fair to say we won’t be seeing this for a while, unless it’s for a movie role or music video or something of that nature, you get the point.

Lastly his Mohawk which can be seen in a variety of ways. 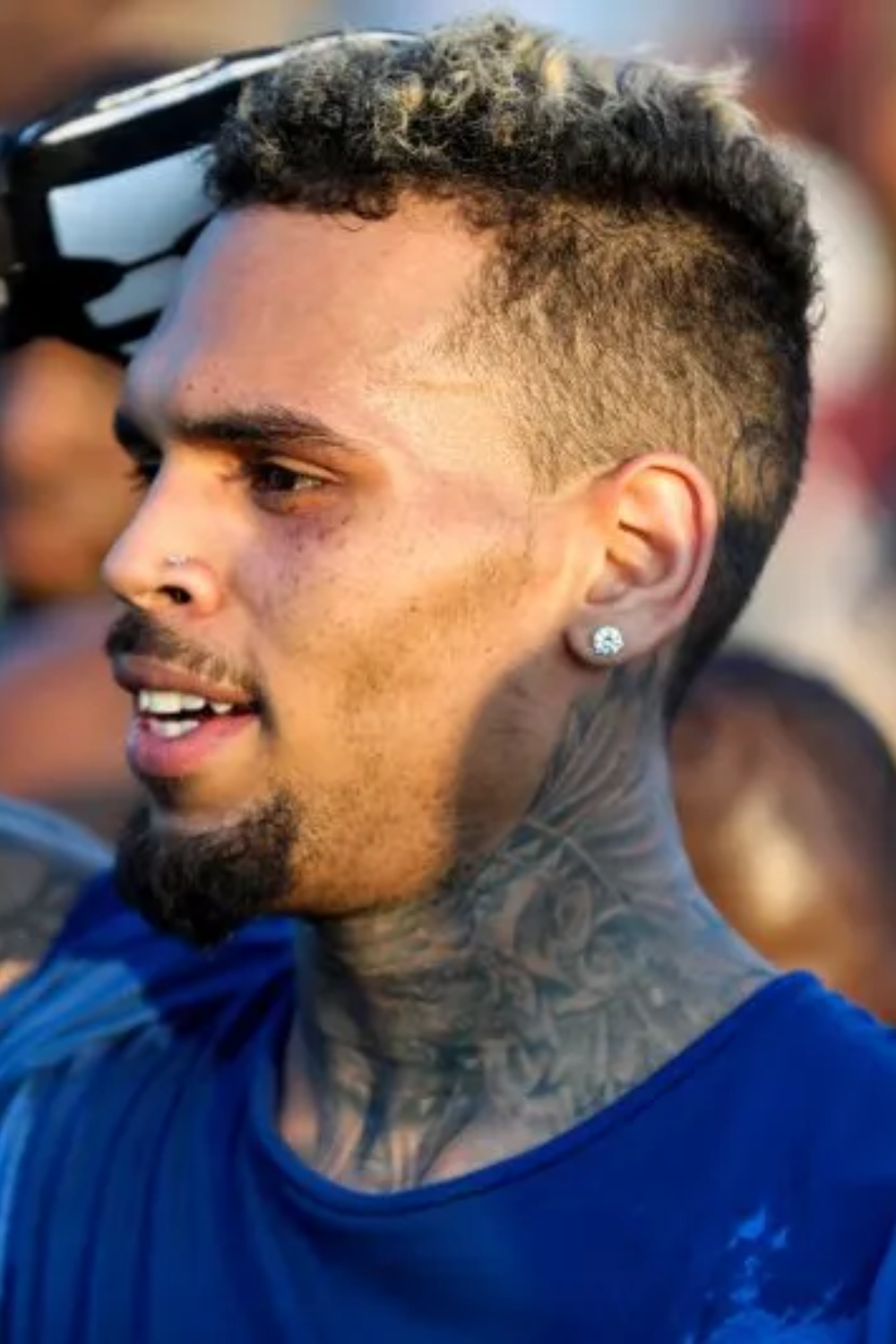 His can be seen on a low afro, on his quiff & Pompadour. In addition to this he can be seen in multiple images styling a burst fade which is similar to his mohawk look.

The burst fade tapers the line of hair behind his ear, which results in leaving hair longer at the neck. We would advise you speak to your barber to ensure you pick a style best suited to your head and face!

Most of the hairstyles featured on Chris Brown require maintenance of some sort especially when it comes to his braids and other protective styles, ensure you do the following

These tips can be applied to the other Chris Brown hair cuts featured within our editorial. Just make sure if you’re going to bleach it you go to a professional.