Even with a 20 year career Jared Leto hair styles continues to be a talking point throughout the media. Since he graced the big screen we have seen his hair styled in multiple ways for movie roles, on the red carpet and for his music visuals.

Our editorial highlights everything from his hair type, signature hairstyles whilst we reveal his hair routine.

Jared Leto’s hair type is black, thick and wavy which falls under category 2 which we have highlighted in the imagery below. 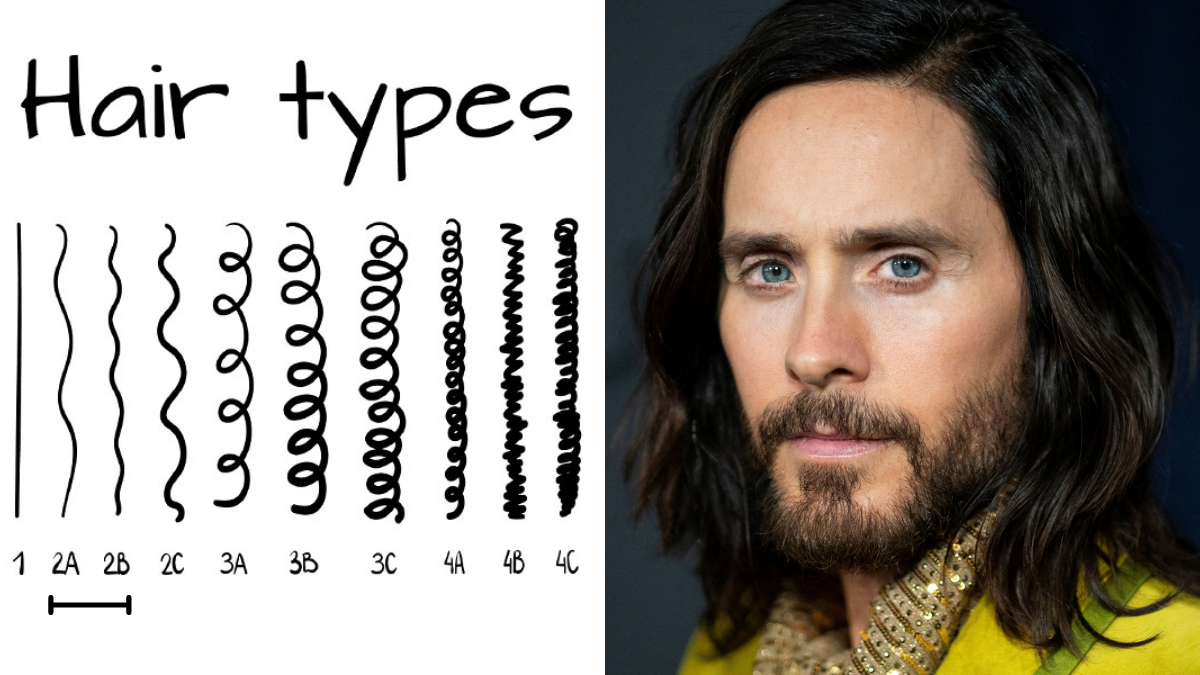 We can identify is hair type being 2A or 2B since his hair begins straight then gets wavy towards the middle all the way to the ends. Hair type is determined by genetics and his is black in colour and thick in texture. 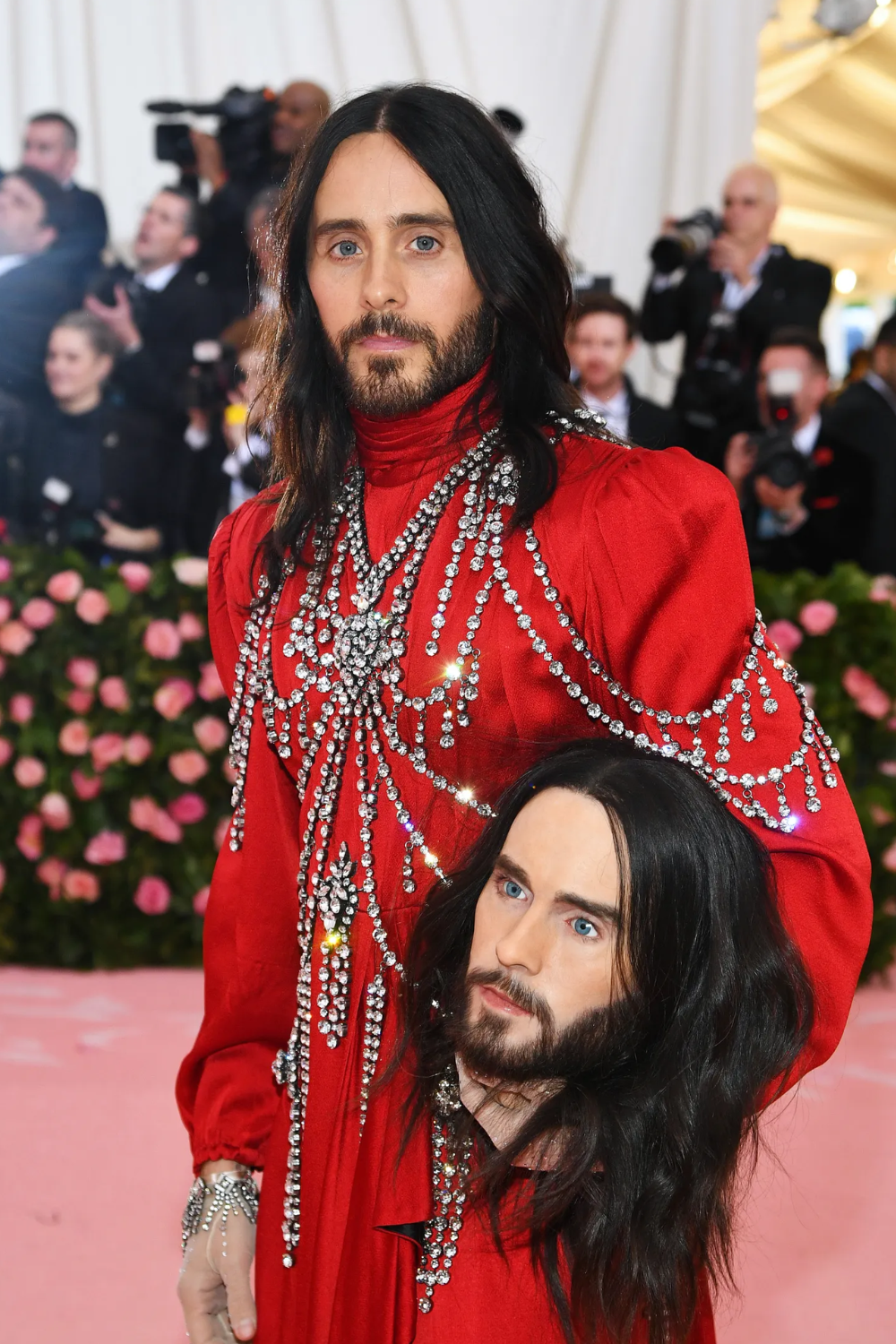 Were all aware of his accolades within Hollywood yet most things around his hair seems to be talked about and shared and with this knowledge we saw him continue to spark interest around his head by bringing a doll version of himself at the 2019 Met Gala.

Outside the shock value elements his long hair is a combination of genetics, good lifestyle habits and world class stylists. 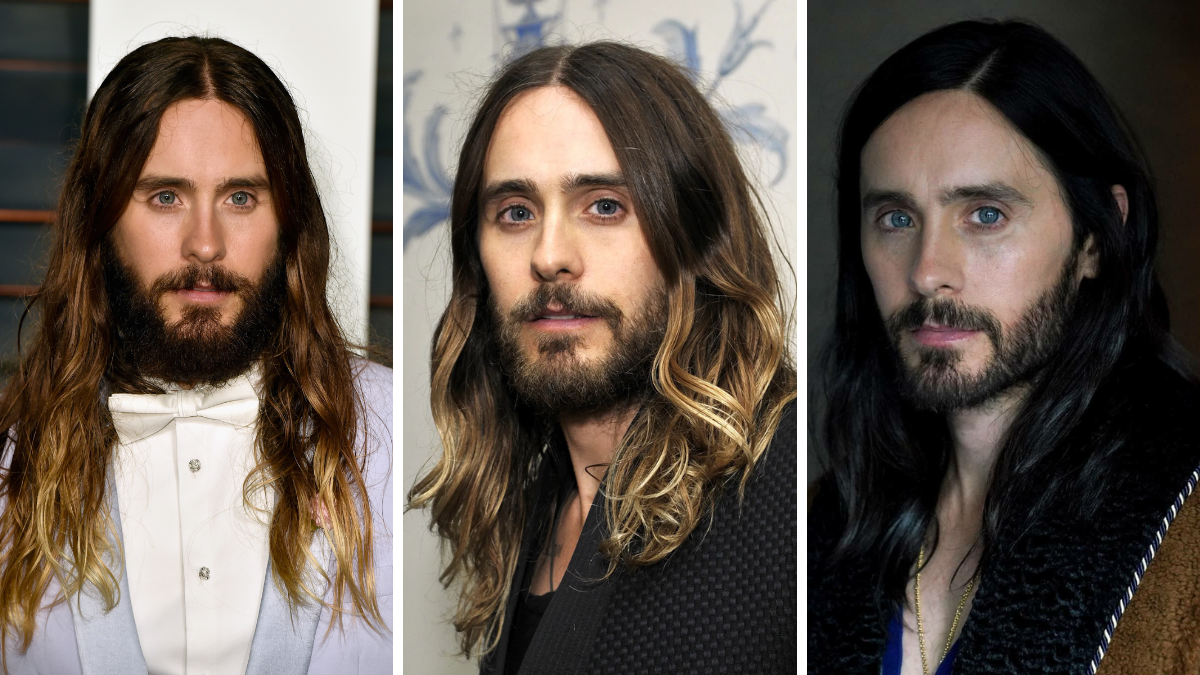 Leto’s hairstylist, Chase Kusero shared in an interview with the New York Magazine that his mother having good genetics maybe the reason for all the hype, thanks Mama Leto!

At different points of his career we have seen Jared Leto sporting a layered hairstyle which reaches his shoulders. 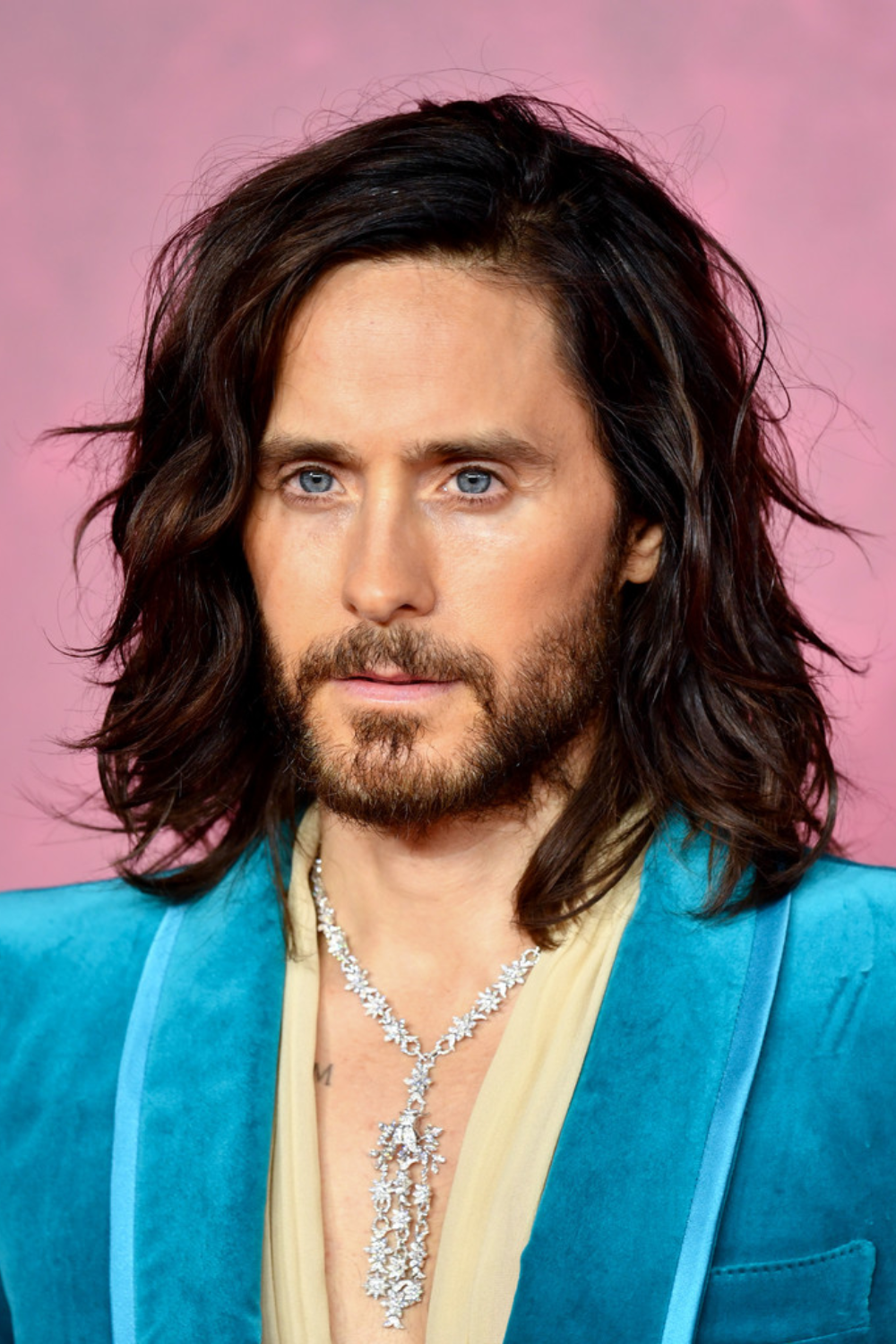 His stylist Kusero ensures once the ends of his hair get fizzy and long they are trimmed to his desired look which happens to be this.

We can see this in old archive photos of this style, for example his appearance at the House of Gucci premiere his hair sits perfectly on his shoulders, wavy and flows. 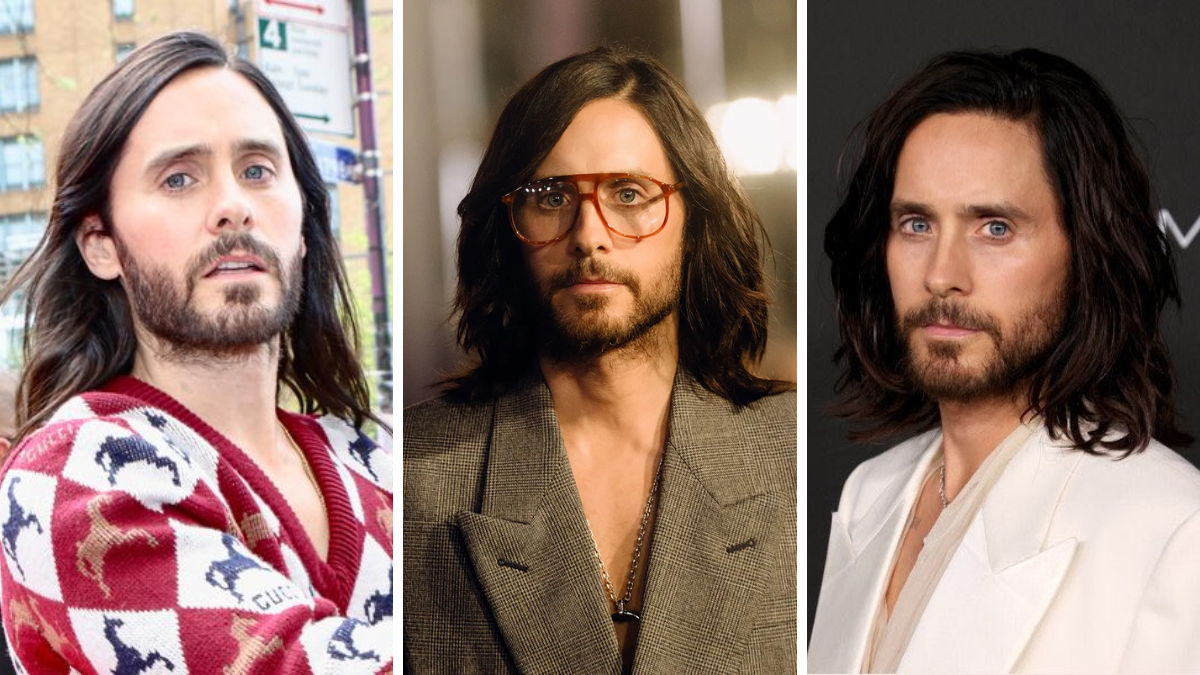 The front of his hair being layered which further highlights his wavy hair pattern.

The beauty of long hair comes from the ability to style it in a variety of ways and in Leto’s case we can see him rocking a braided or loose ponytail, half up half down ponytail or his man bun. 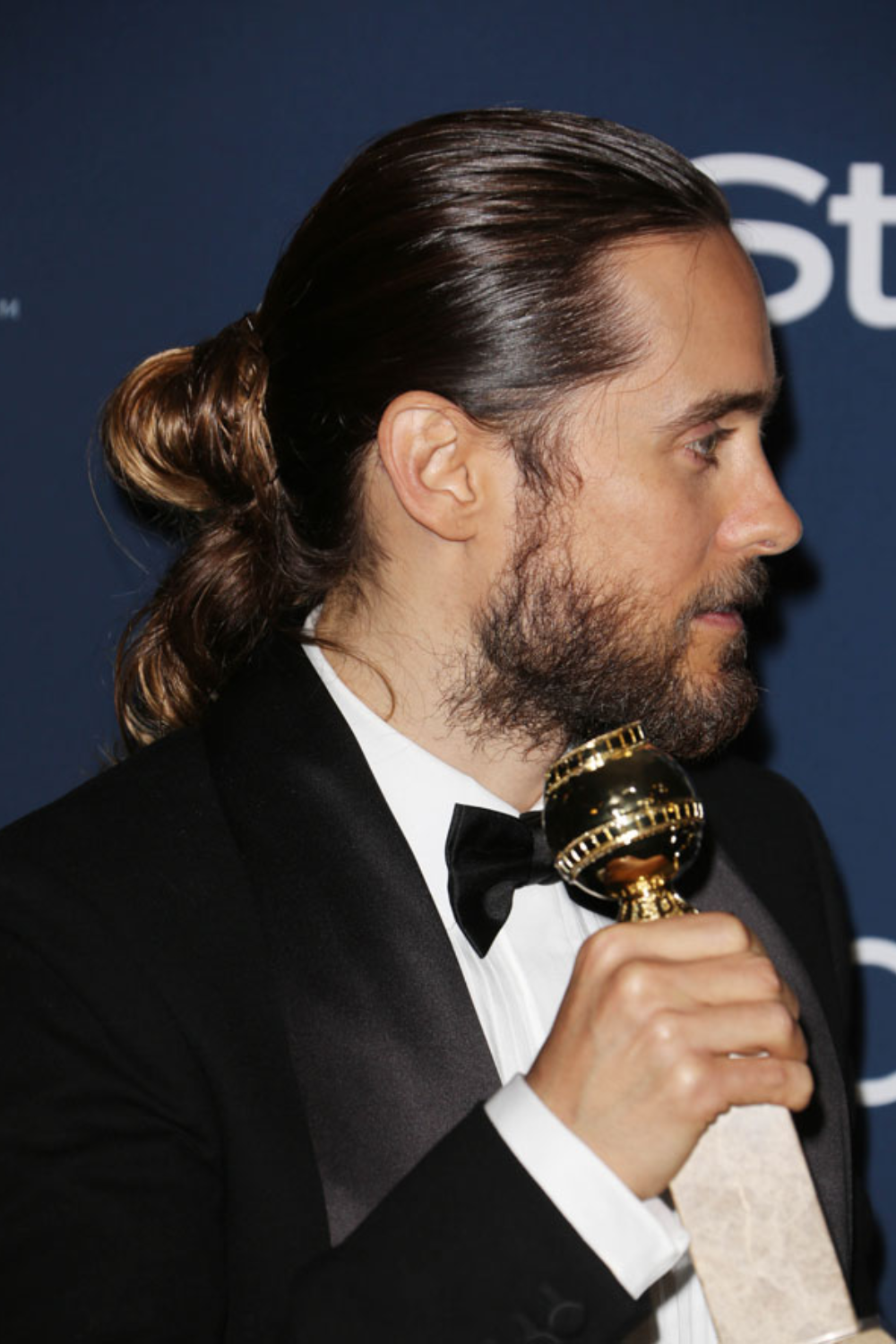 Outside of the ponytail looking great it has its long list of practical benefits which may be another reason we have seen the actor style his like this. 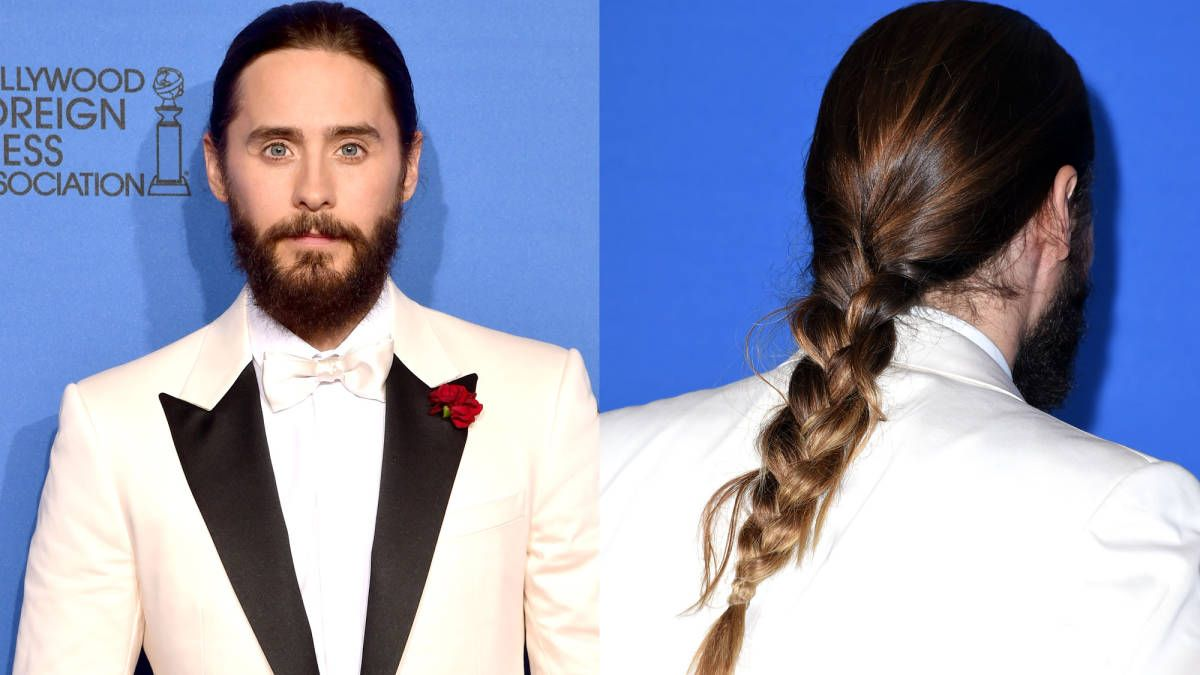 Some Hollywood roles require actors to make big sacrifices and in Jared Leto’s case this came in the form of having his hair cut to fulfil his role as the joker in suicide squad. 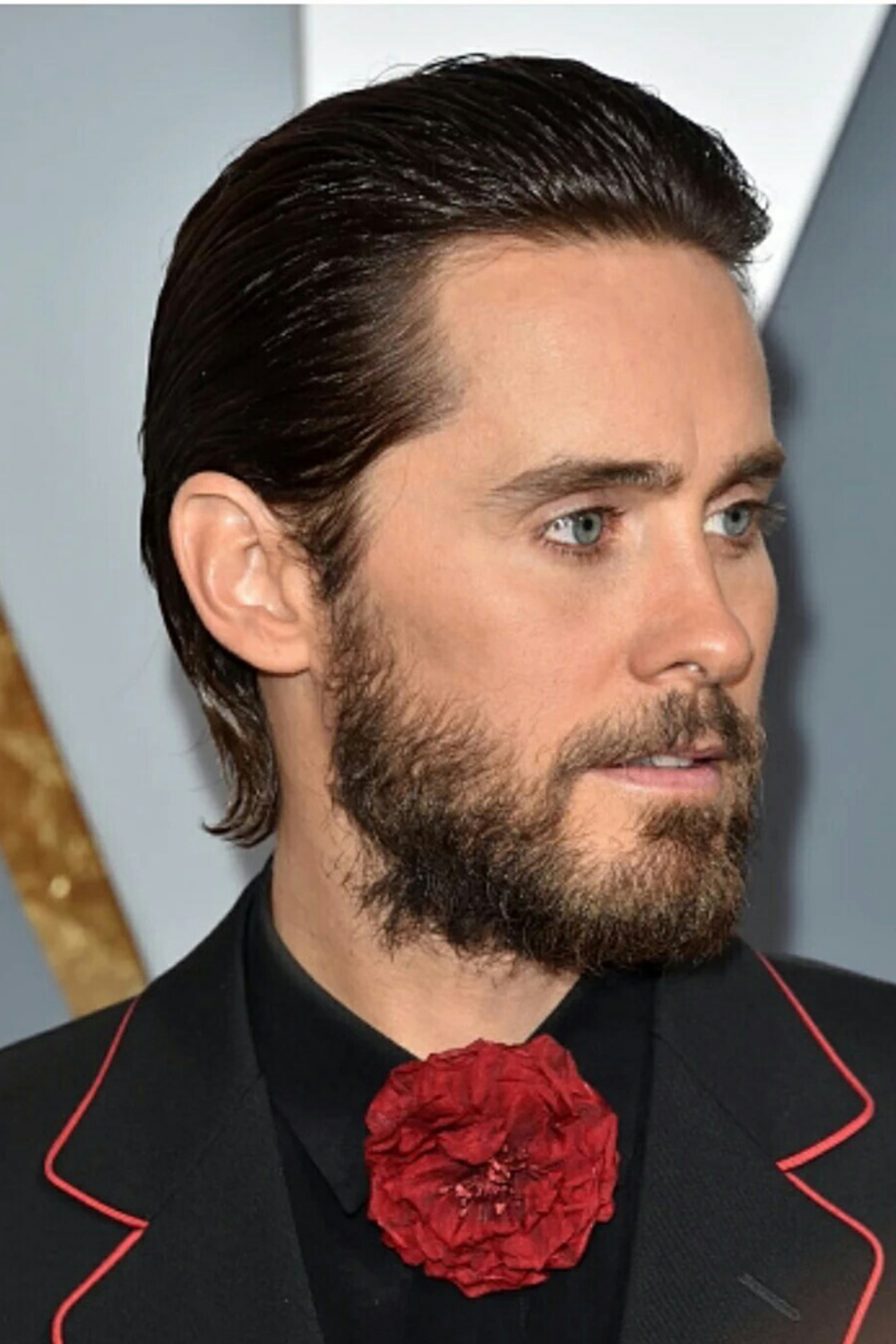 During 2016 most images of Jared feature his hair short, brunette and slicked back.

he introduced the new trailer for Suicide Squad and his character’s hair was green and one which has stuck in our memory for years. Whilst we prefer his longer hair we can also appreciate the sacrifices it takes to embody a character. 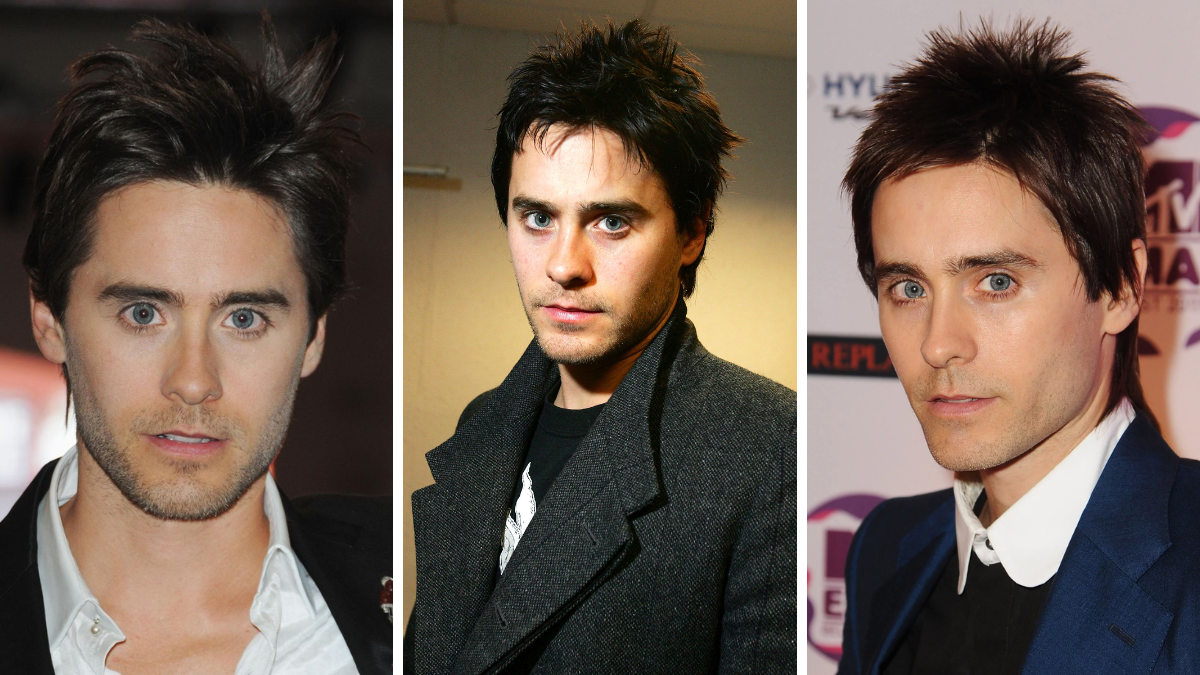 Another example of Hollywood calling for his hair to be changed can be seen in the movie “Panic Room” in which Jared hair is braided. 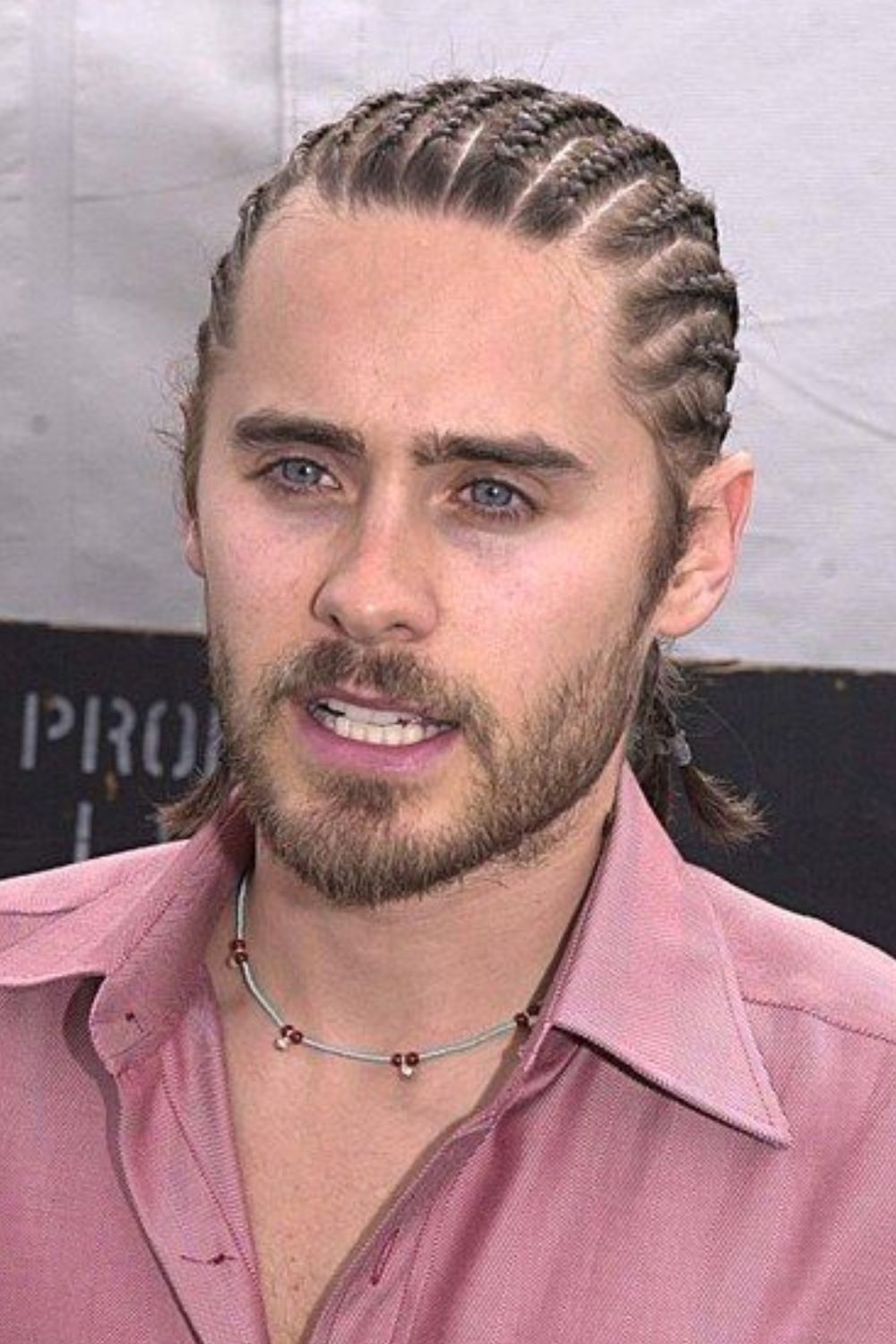 The 2002 film went on to win several movie awards and whilst this is considered a great movie of its time it’s equally remembered for this actors hairstyle.

It’s very rare to see some of Caucasian descent style their hair in cornrows which is why the image continues to be remembered. 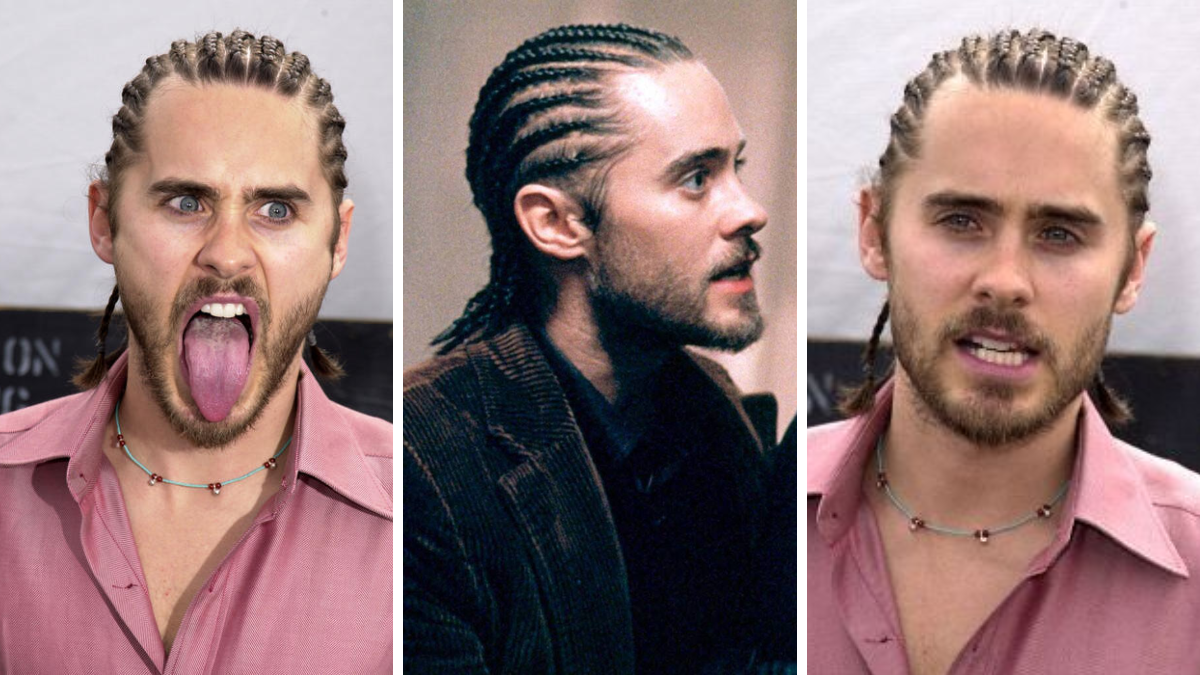 In a behind-the-scenes of making of Panic Room, Jared Leto jokingly said that it was the director David Fincher who braided his hair, however in our minds the film production would have an allocated budget for hair and make up to hire professionals.

Whoever did it our hats go off to you!

After the period we saw Jared leto hair being cut for his appearance in Suicide squad we also saw the actor becoming much more experimental with colour. 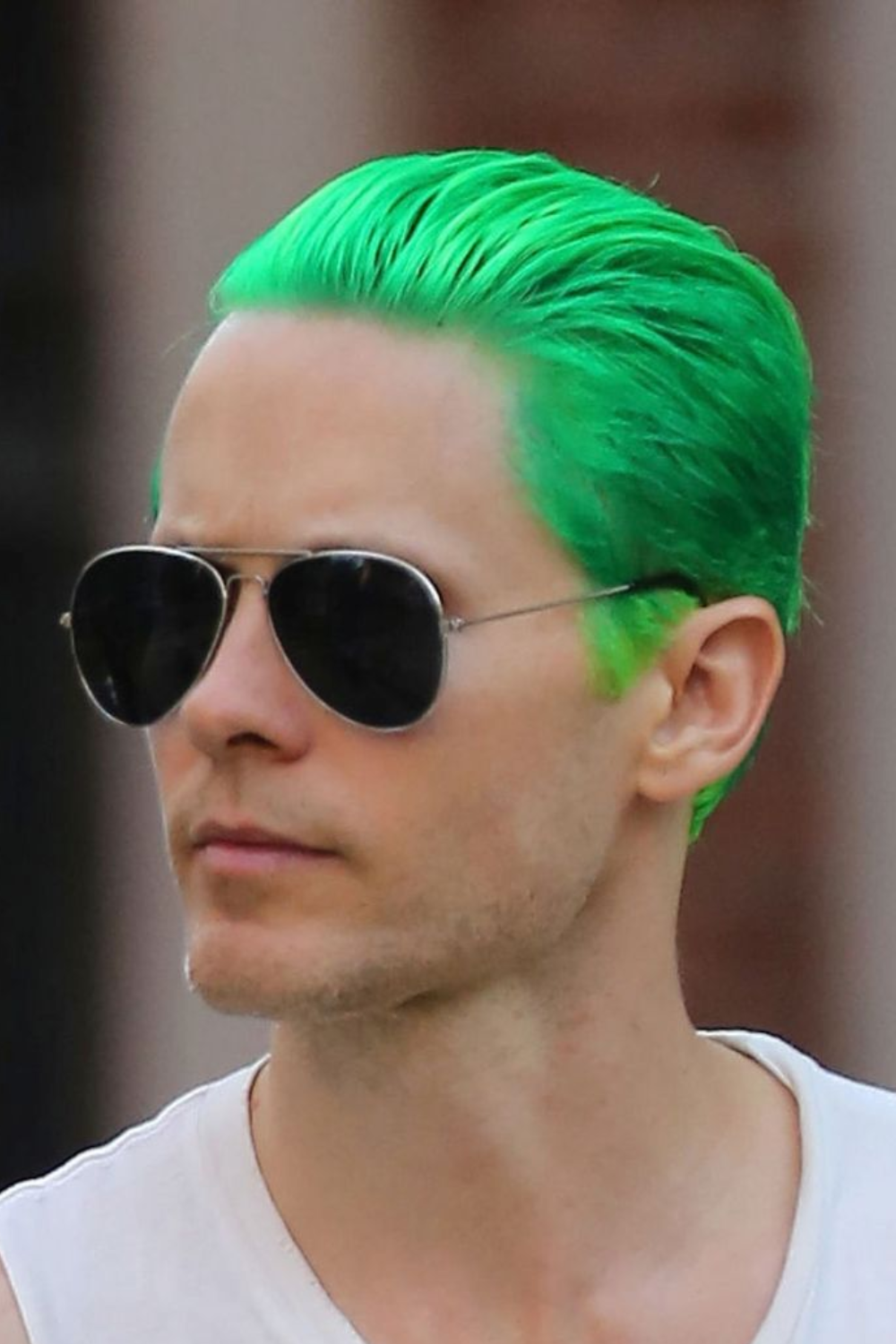 From his bleach-blonde hairstyle he debuted at the Balmain show at Paris Fashion Week or his bright pink look at the MTV VMAs it became clear that he was enjoying these hair colours before he would regrow his hair again. 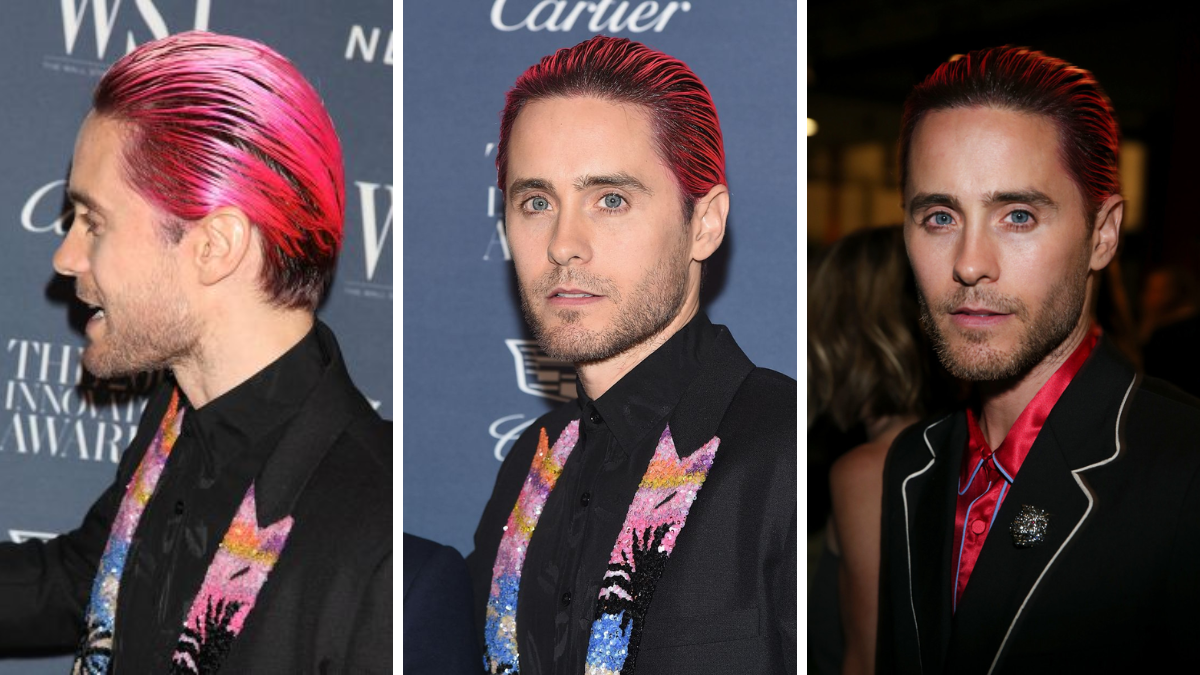 Disclaimer: See professionals for colour and bleaching! If you haven’t done this before you run the risk of damaging your hair.

How To get Jared Leto Hair

As our editorial demonstrates we have seen multiple Jared Leto hairstyles which all require a separate hair grooming routine and cut, therefore were going to assume your wanting to recreate his signature long hair.

Step 1 (The Haircut) – Once your hair is long enough you’re going to ask your barber or hairstylist for a mid-length round layer.

This will be the base of your hairstyle

Step 2- (Maintenance) – With the cut now out of the way you will be able to use the best suited product for your waves. This is to ensure your hair stays in style for as long as possible.

Feel free to use hair paste, clay or the occasional blow dry to really bring the hair volume to life.