Since its inception Hip Hop culture has been centred on individuality and freedom of expression. This freedom of expression has taken place in many different forms such as vocal style, appearance & music visuals, however one of the more unconventional examples of this today comes in the form of rappers with Face Tattoos.

Today we have multiple examples of rappers choosing to use their face as a canvas for art. While the majority of rappers have tattoos on their bodies we have been able to identify a growing trend & culture of facial tattoos within Hip Hop. Each representing something unique, from storytelling, branding to marking their respective hometown, crew and family.

Our editorial details all the rappers with facial tattoos, their meanings and history!

Here are the most Popular Rappers with Face Tattoos 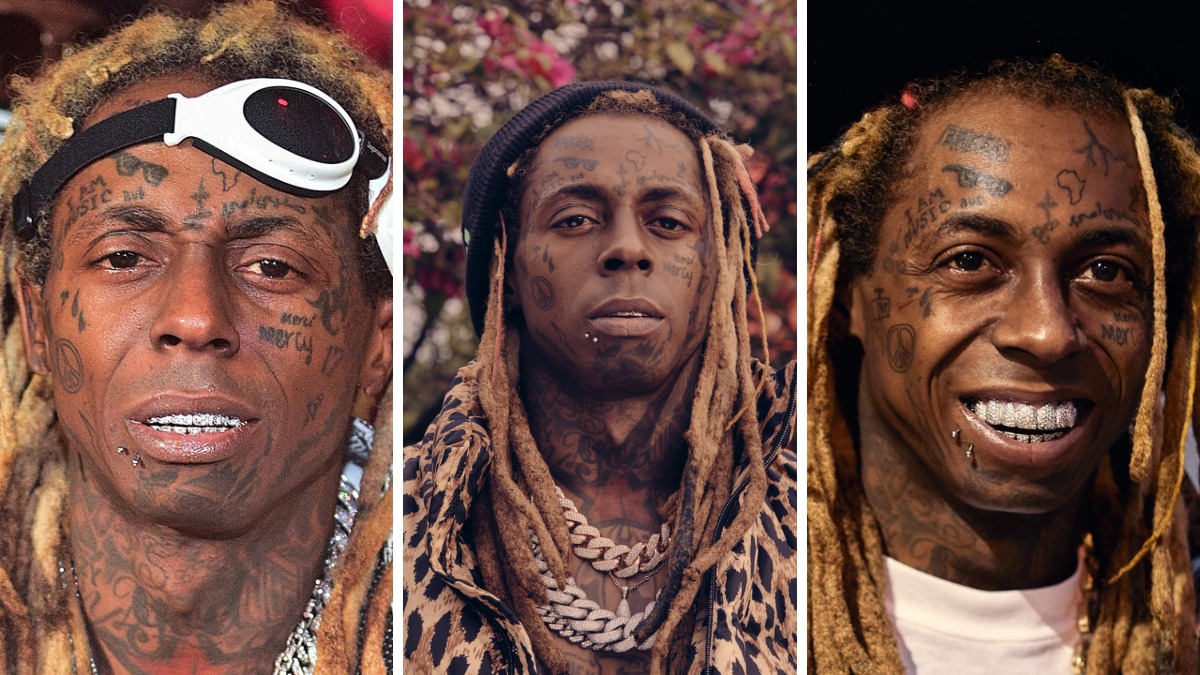 Today Lil Wayne can be regarded one of the most influential rappers to ever record music. During his early career and peak it was uncommon for a rapper to tattoo their face until Wayne made it the status quo. Fast forward to today and it’s no surprise we have multiple rappers who have followed tradition set by Wayne also tattooing their faces.

Some of the art across his face range from, a skull and crossbones tattoo on his chin, tear drop under his eye, handwriting across his eye lids which read “Fear God”, power icon, stars and many other pieces. 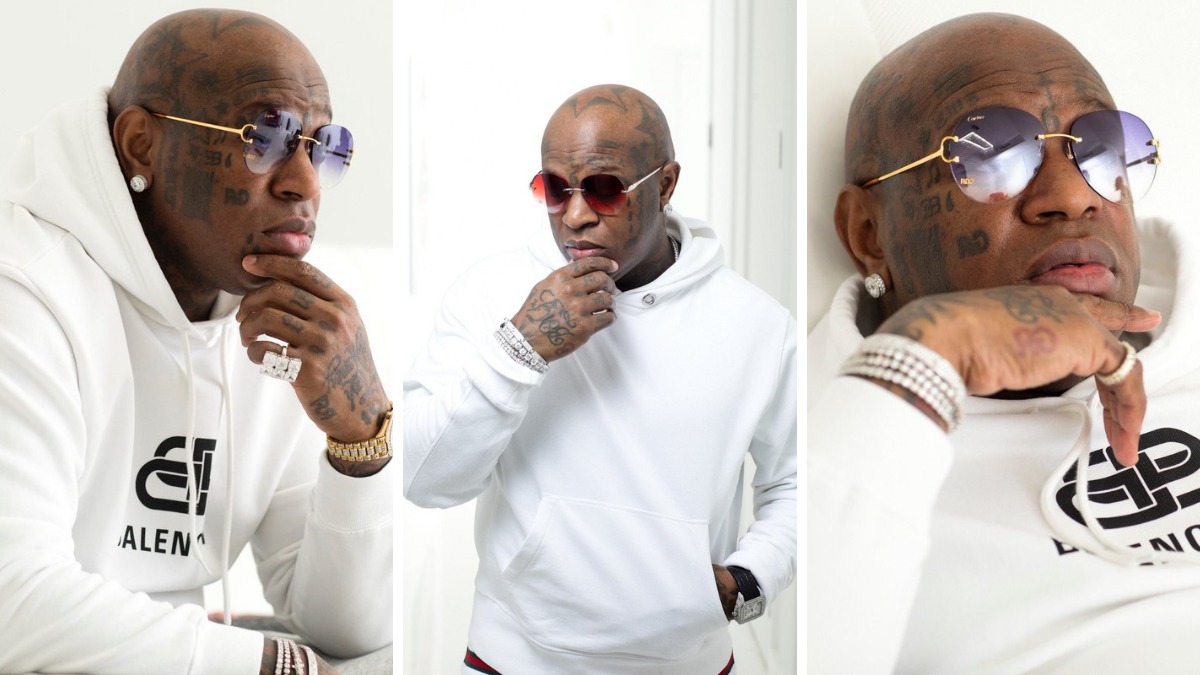 Birdman being the founder of Cash Money Records, Rap Label to the Heavy hitters Wayne, Drake and Nicki Minaj, is one of the most successful rappers and moguls within the music industry. These accolades has given Birdman Boss status, which he used his face tattoos to demonstrate and remind the world of his value and accomplishments.

For example an “XXV” tattoo representing 25th anniversary (the release year of his record label) or his label logos.

However Birdman stated that he consulted 50 cent regarding the procedure to remove his face tattoos. The process looks to be an ongoing one as Birdman’s facial tattoos aren’t as prevalent as they used to be.

He shares more about this here – 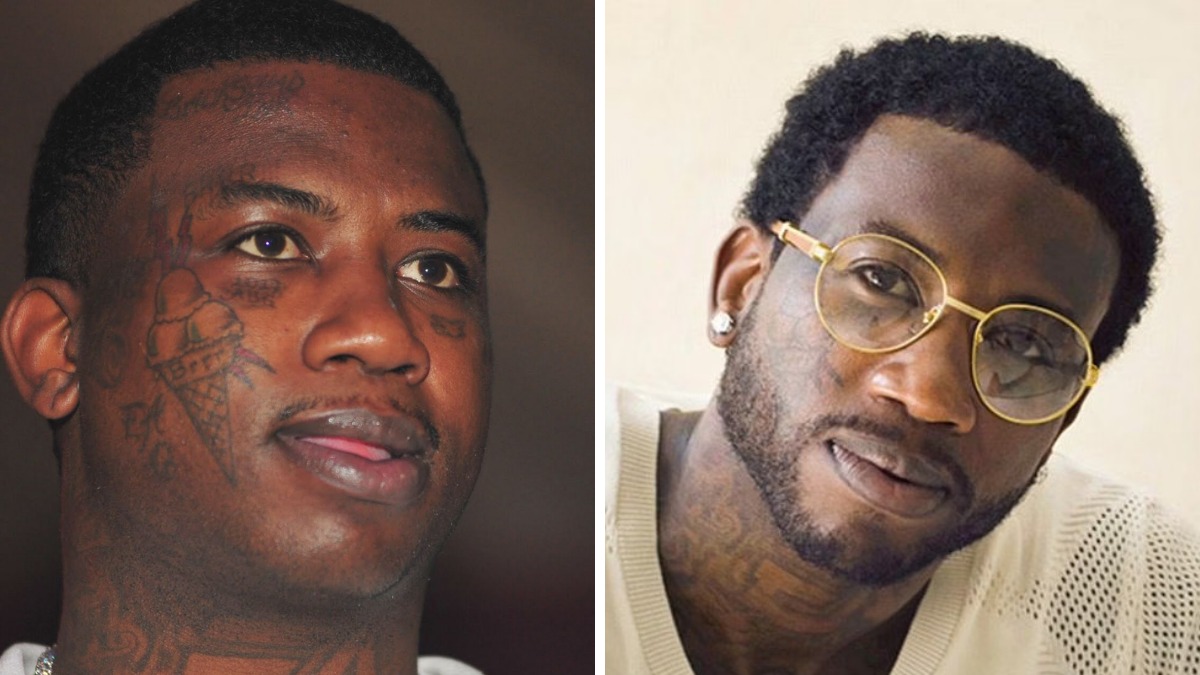 Back in 2011 Gucci made one of the most taboo moves in his career by tattooing an ice cream on the side of his face. Back then Gucci was known for his over the top antics, street cred and gangster persona. While he has other facial tattoos such as tear drops and other symbols the ice cream cone is what made the headlines.

Today he is reformed and a totally different person who similarly to baby has made efforts to remove his facial tattoos and clear his face as the ice cream is not as evident. 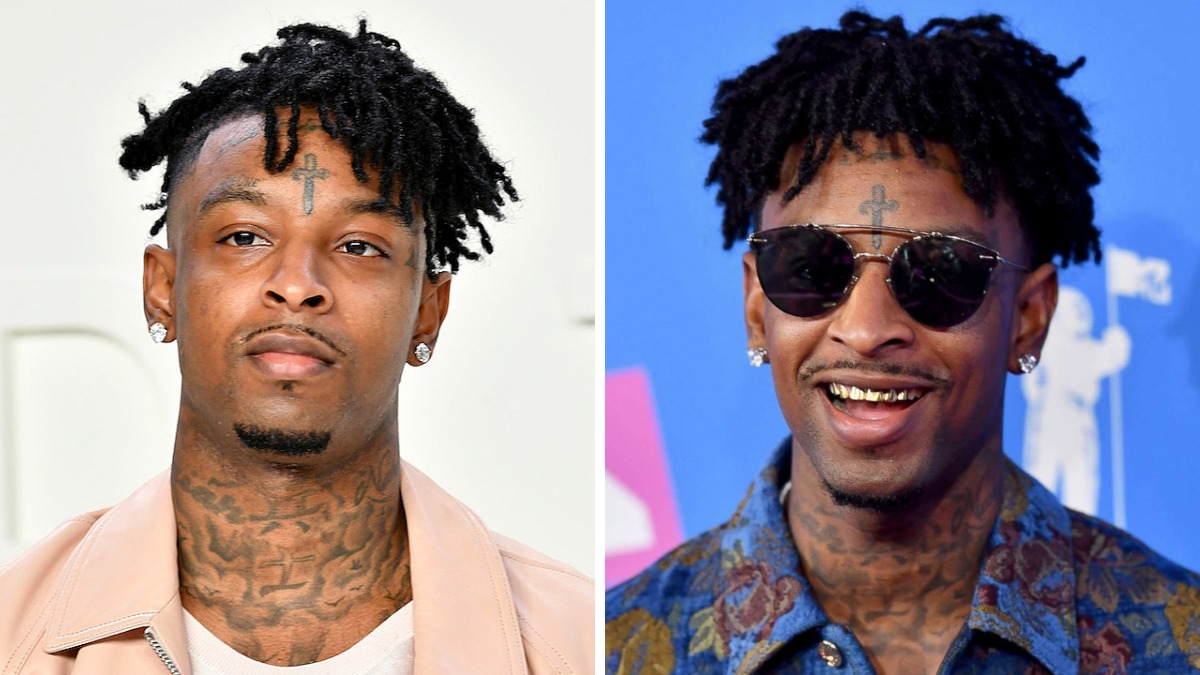 As we mentioned in the introduction some rappers with face tattoos choose to ink the face for different reasons. In 21 Savages case his dagger tattoo is a tribute to his younger brother Tay man who was killed. Tay man had the tatt to represent the crew he grew up with. After his death 21 savage decided to pay homage to him in this way.

Outside of the dagger tattoo he also has other small symbols across his forehead. He keeps the facial tattoos to a minimal which may work in his favour should he decide to remove them. 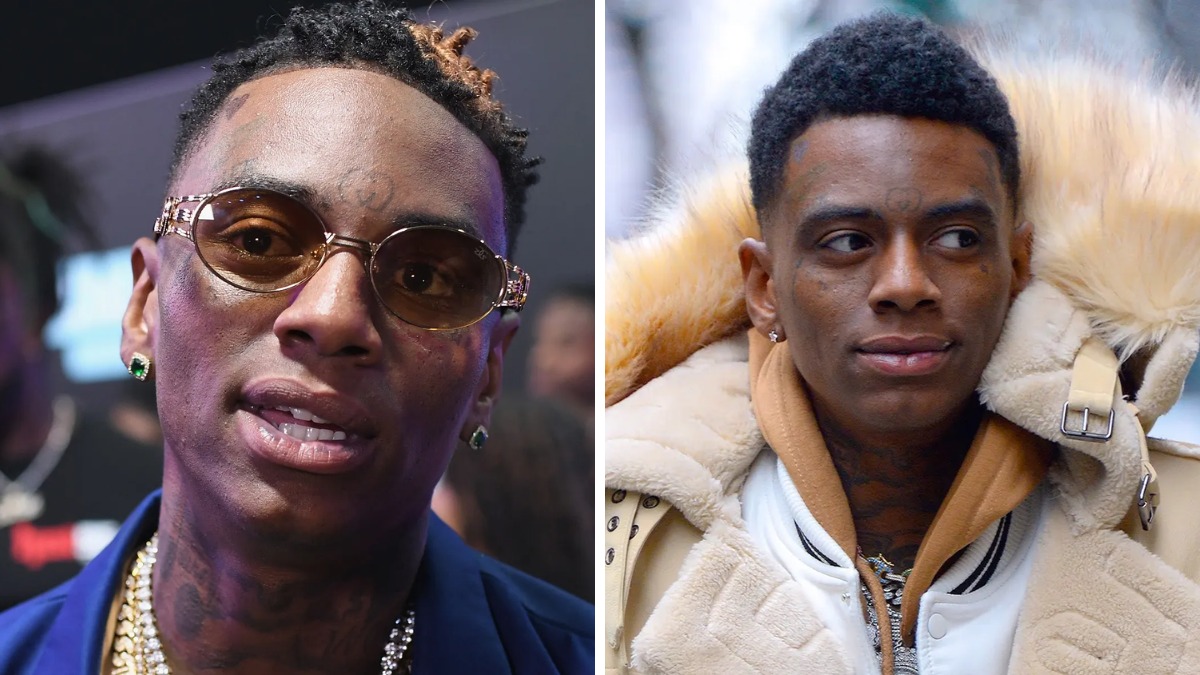 Soulja began his tattoo journey at the age of 16 which quickly became an addiction. His first tattoo was the SOD money gang logo which is his record label. While Soulja boy has various tattoos the most recognizable one is the Gucci logo on his forehead. His tattoo was drawn by famous American tattoo artist Mr. Cartoon who has worked with artists such as 50 cent, Dr Dre, Eminem and Snoop Dog to name a few.

While facial tattoos became a trademark look for Soulja he is currently undergoing laser treatment to remove his tattoos to increase his opportunity for TV and movie roles. 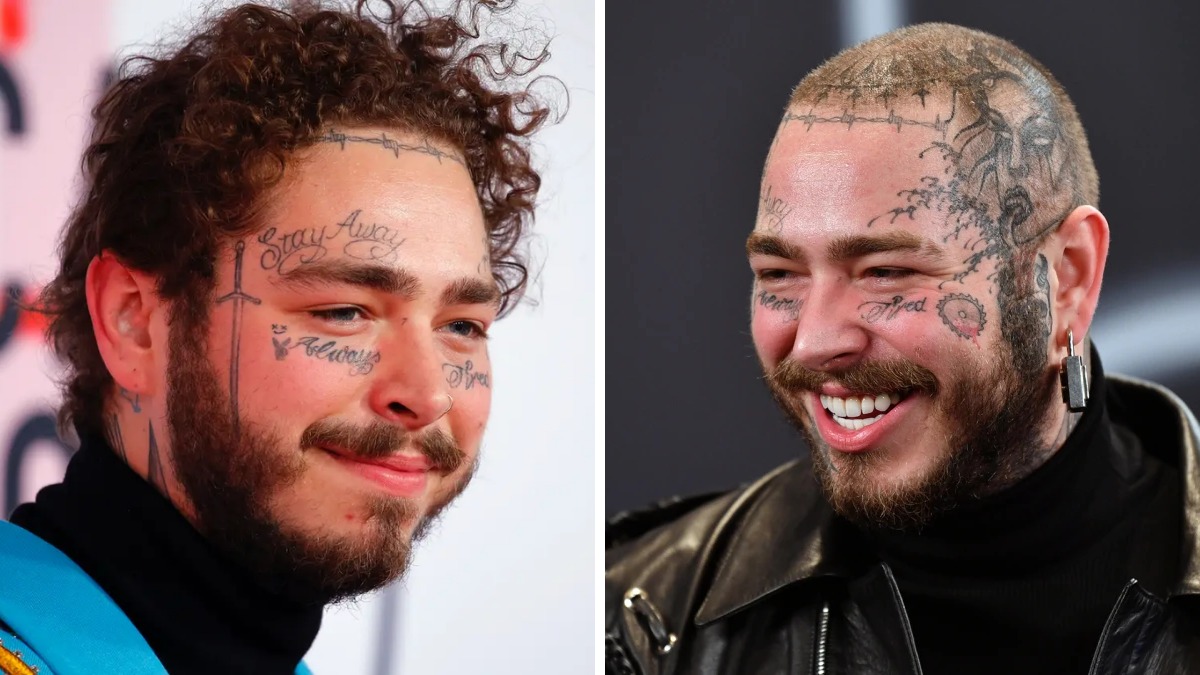 It should be well known by now that Post Malone has tattoos all over his body, however it’s his over the top facial tattoos that garners all the attention of the masses. Malone got the words “Stay Away” tattooed on his face in March of 2018.

The reason for the tattoo is still unknown, but it’s been speculated that it has something to do with his friends and family. At the time people criticised Malone for getting the tattoo, but he’s defended it by saying that it’s a personal thing and the words were in fact lyrics.

The stay away tattoo was the first of many as he now has other tattoos under his eyes reading “always tired” along with a bulb wire tattoo across his forehead. 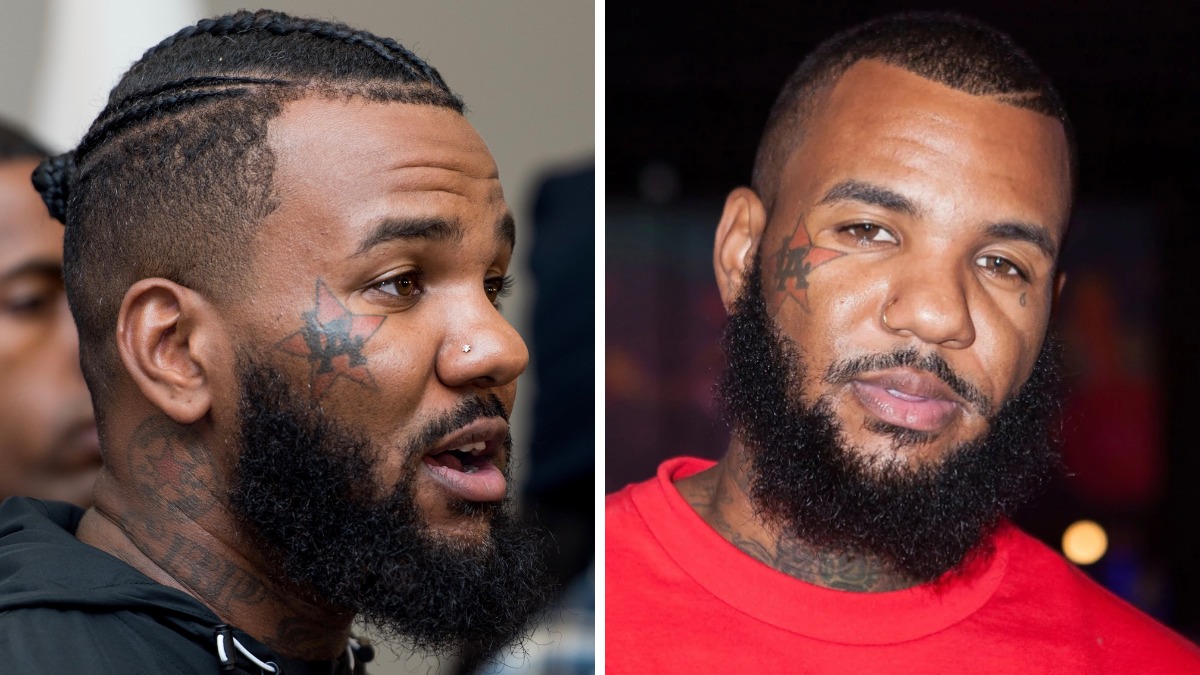 Rapper the Game most notorious face tattoos consists of a teardrop under his left eye and the LA dodgers logo. These tattoo are symbolic of the pain he’s endured in his life, including losing friends and family members to violence. His tattoos also pay homage to the gang culture that he grew up in and hometown. 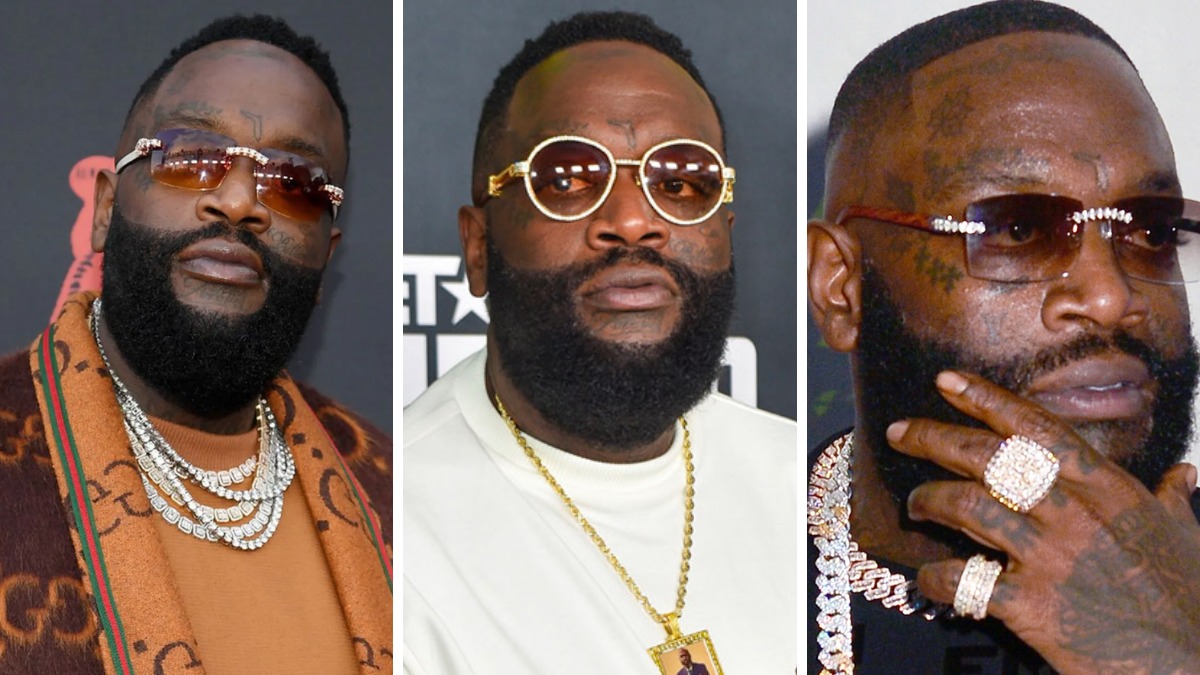 If theres one common theme with regard to Rick Ross’s face tattoo’s its money and luxury. The rapper has multiple different tattoos across his face to signal wealth. For example his rich forever tattoo under his lower lip is self-explanatory.

His record label Maybach Music Group logo sits on the left side of his face while the words “in search of True Wealth” sits across his forehead. It’s no mistake Ross has used his body art to communicate riches, after all he is the biggest boss!

Ross has spoken about the different tattoos on his body being something he doesn’t regret but more so a memoir that represents a particular time in his life.

It’s well-known that Trippie Redd has very controversial tattoos such as the 666 across his eyelids. As we mentioned earlier Lil Wayne being one of the most influential artists has been able to be the reason younger rappers tattoo their face which is the case here.

In an interview with GQ Trippie expressed being inspired by Wayne to tattoo his eyelids, however the tattoos couldn’t be any more different. Wayne’s eye lids read Fear God, Trippies say 666.

Outside of this he has other facial tattoos such as the number 14 between his eyebrows. He grew up on 14th street which is why he tattooed this. 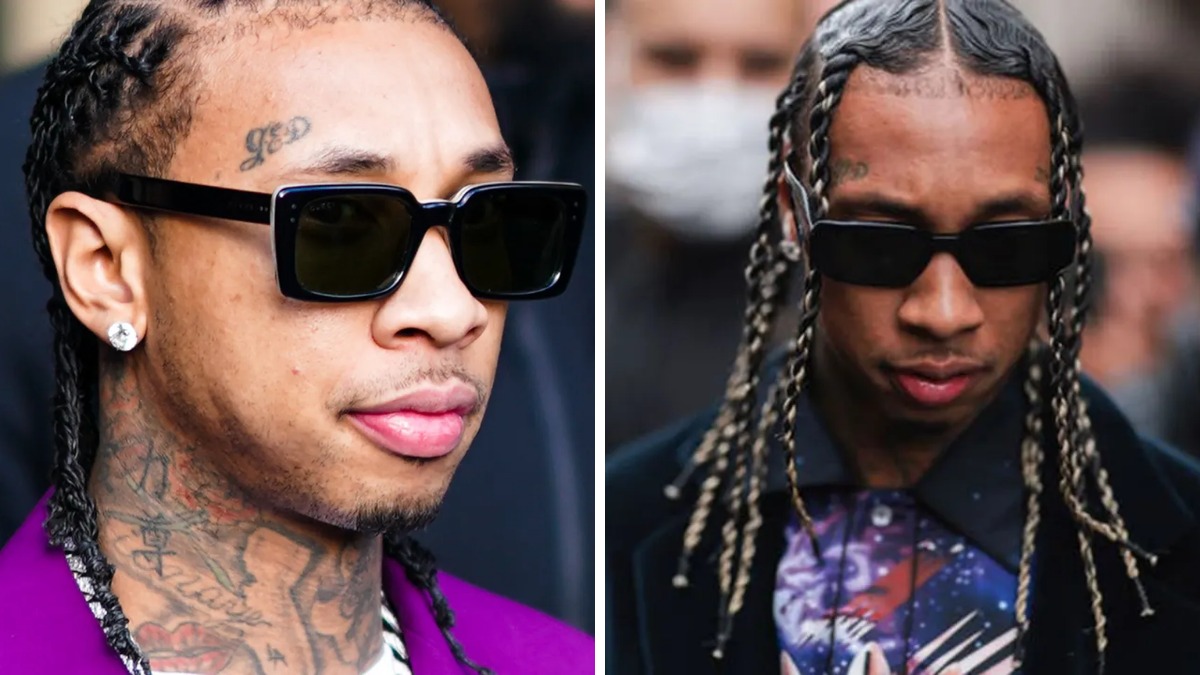 During the early phase of Tygas career he formed his own record label entitled G.E.D (Grinding every day, Getting every dollar, or Getting educated daily) which can be seen across his face.

Outside of this tattoo Tygas face is fairly clear from tattoo work, similar to Wiz Khalifa. Multiple tattoos across the body with minimal work done to his face. 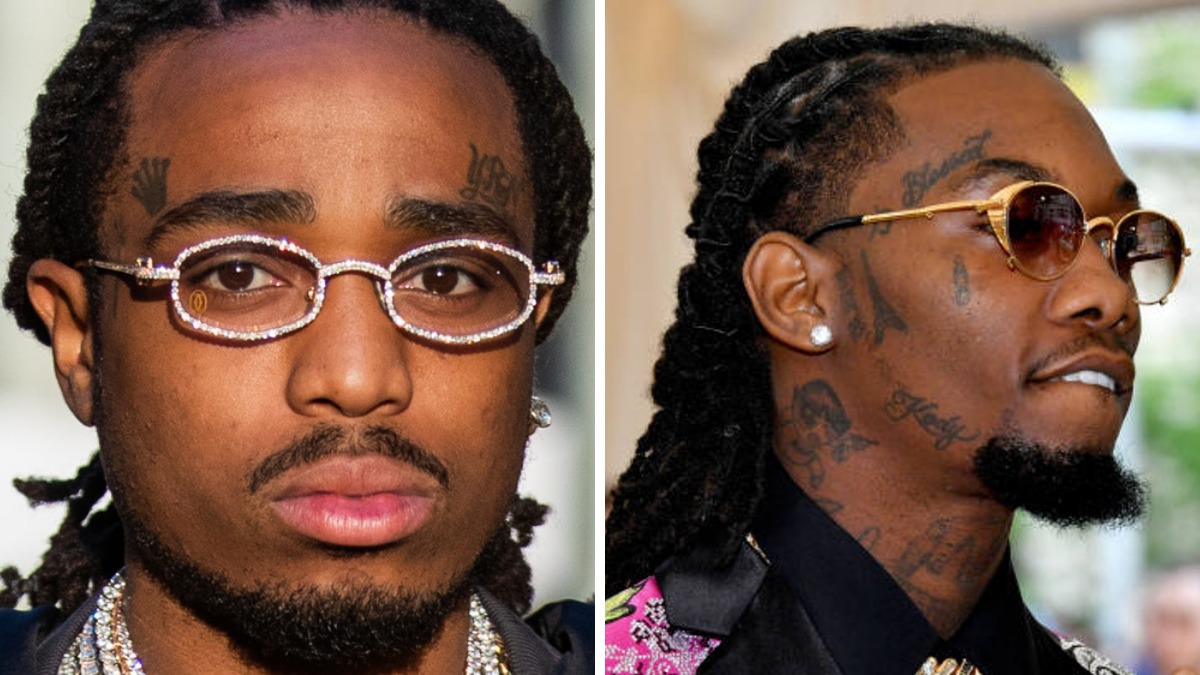 Quavo – Quavo has 2 facial tattoos, one being the letters YRN which stand for Yung Rich Nation. This was the name of the groups 3rd mixtape, a mixtape that helped propel the group into fame with the hit Versace

The 2nd being a kings crown which communicates royalty and high status.

Offset – Offset on the other hand in comparison to his cousin Quavo has more facial tattoos. Firstly he has the words “Blessed” On the top of his right eyebrow which should be self-explanatory. He expresses gratitude for his fortune and fame, he has his daughters name Kulture on the lower side of his face. Other facial tattoos range from a cross, Eiffel Towel and love hearts. 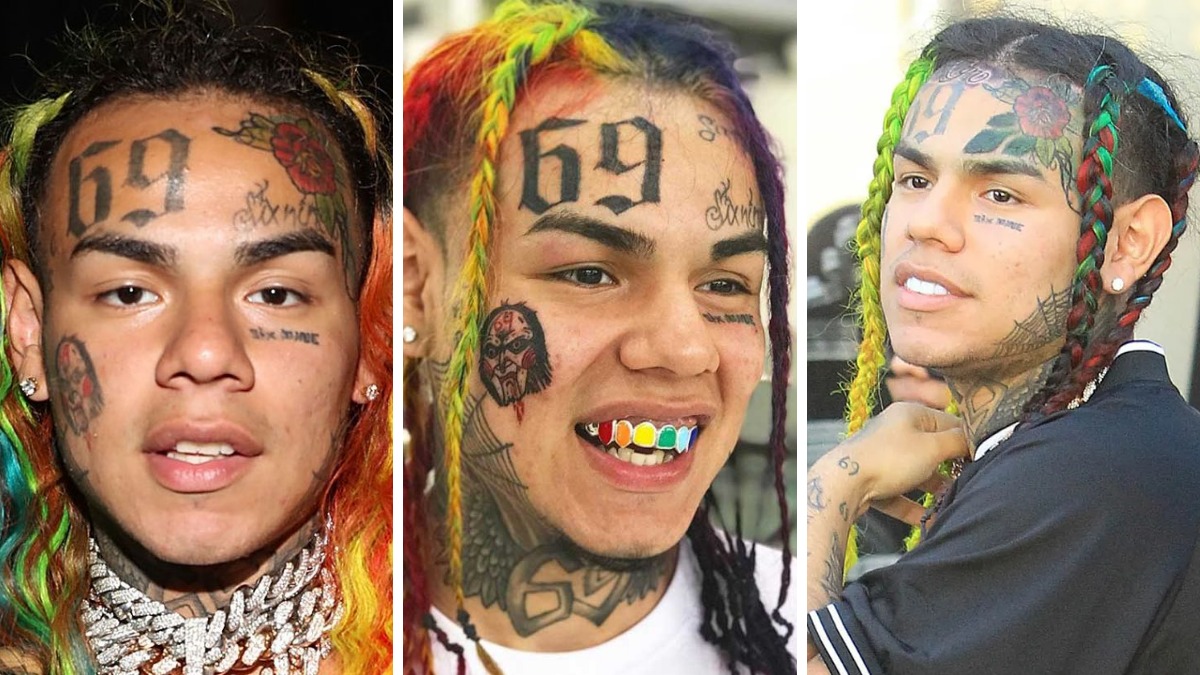 69 may be the most recognisable rapper with a face tattoo!

In an attempt to uniquely market and brand himself 69 continuously dyes his hair in multiple colours while having several tattoos across his face, including a large “69” on his forehead, Billy the Puppet along with a Spider web Tattoo.

While the majority of facial tattoos are for branding 69 has stated his tattoos serve a purpose and meaning. In an interview with Angie he explained “Turn the 6 upside down it’s 9 but remains the same in a different perspective,”

Further explaining we all might see the same thing but have a different outcome or perspective. 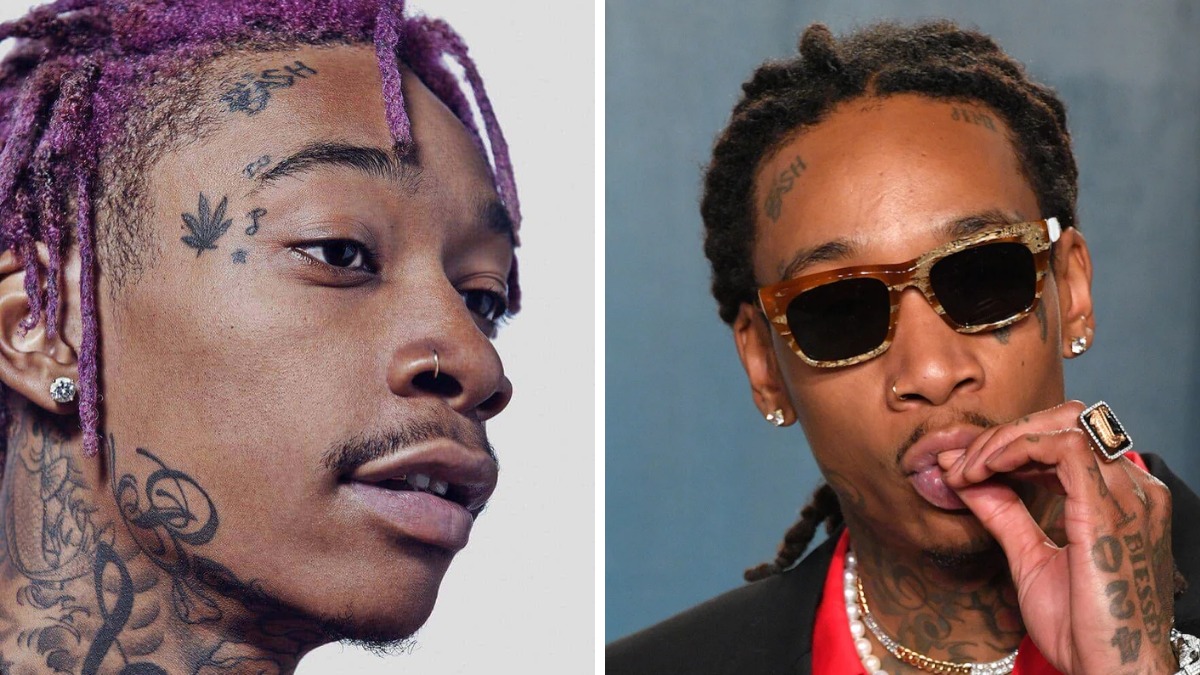 The Hip Hop community was first introduced to Wiz with the global hit Black and Yellow back in 2010. In the video we see Wiz covered with tatts across his body with no facial tattoos at the time.

Today he has 3 main facial tattoos, one reading “Bash” which is the name of his son who he co parents with Amber Rose, marijuana sign and a star besides his right eye which he has stated is a symbol of protection and guidance.

Considering we have evidence of the large growing culture around facial tattoos in Hip Hop we can also see these same rappers choosing to remove their tattoos as they age. These conscious decisions are made to improve the health and appearance of their skin, remove negative stereotype but most importantly not look weird in their older years.

Why do rappers tattoo their face?

Rappers tattoo their faces for different reasons ranging from wanting to convey a story, branding, represent their hometown, crew, family, gang affiliation, expression of lyrics or simply to showcase art. Each rapper on the list will have a completely different reason from the next rapper for their face tattoo.