In the image above who did you spot first? The guy in the bright blue overshirt right? Exactly! This is a prime example of peacocking.

While this photo was unplanned the imagery above perfectly helps illustrate peacocking. Whether you’re conscious of it or not men peacock to communicate their value to the world and our editorial looks at the motivation behind this.

Having observed men and male nature behavioural scientists created the phrase “peacocking” which simply is a term used to describe men standing out in order to attract women.

The practice involves the use of brighter colours, loud patterns, bold fashion statements and accessories to capture the attention off the opposite sex.

Studies have shown that within the first seven seconds of meeting, people have formed an opinion of who you are and by the tenth second begin to determine if you’re a likable person.

By peacocking you’re essentially using your personal style to communicate assertiveness, confidence and independent thought, all traits that women find attractive in men so why wouldn’t you peacock!

Why do Men Peacock? 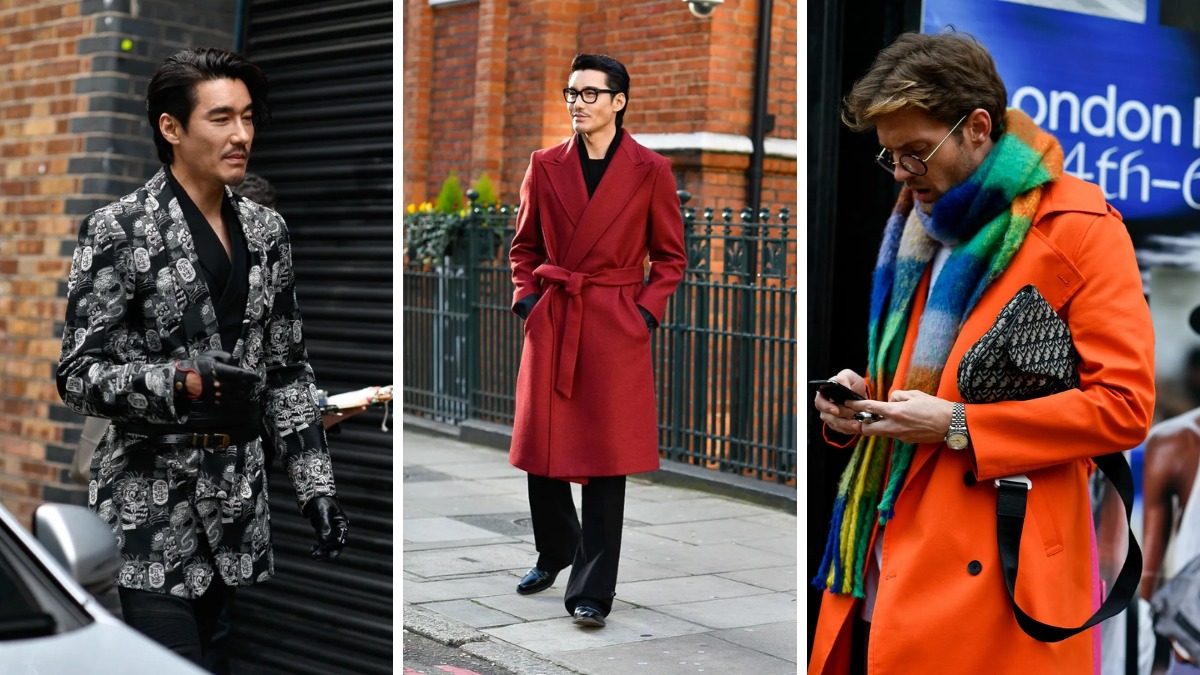 Now that we know what peacocking is why do men do it?

Let’s peel it back even further.

Our guess is that you have probably demonstrated these behavioural traits before you even knew there was a term for it, as far back as your days in school or college.

Cast your mind back to your crush or childhood sweet heart, when you were around her vicinity you would act different and try to get her attention.

This meant getting creative with your approach to standing out! Dressing up, wearing aftershave, exhibiting traits such as a leader and being conscious of your body posture! This my friends is all peacocking!

Men are natural problem solvers and will use strategies available to them to attract women. So if it means wearing bright colours in an environment where the majority of people are using dull colours that’s what they will do!

Most men do it without Realizing

Knowing how to shoot your shot is secondary to grabbing her attention first.

Men intuitively understand that holding female attention and dating is a competition, whether that be online or offline.

With this prior knowledge men seek to put themselves in the best possible position to get dates and form relationships. This reality for men means doing things to position themselves for the best results.

This shapes behaviour and is the reason we as men tend to hit the gym, regularly groom and pick clothes that not only make us stand out but give us the best chances for dates.

These traits, behaviours and practices for the modern man are executed based on impulse.

Reverse engineer what catches your attention

No longer are you just going to put on clothes, now we require you to make the conscious effort to put pieces together which puts you in the best standing.

Women have mastered this art and can command the attention of an entire room. Yes if she’s pretty that will almost be natural but what compliments her looks is her attire making her more desirable and sort after.

We say all that to say think about your best dressed peers, characters in movies or TV stars that you were inspired by and take notes of how they put certain outfits together.

I’ll give you an example, the scene in Bad Boys 2 when Will puts on his purple suit and looks the man has been ingrained in my brain. The influence of that scene can be seen in the colourful blazers I wear today! 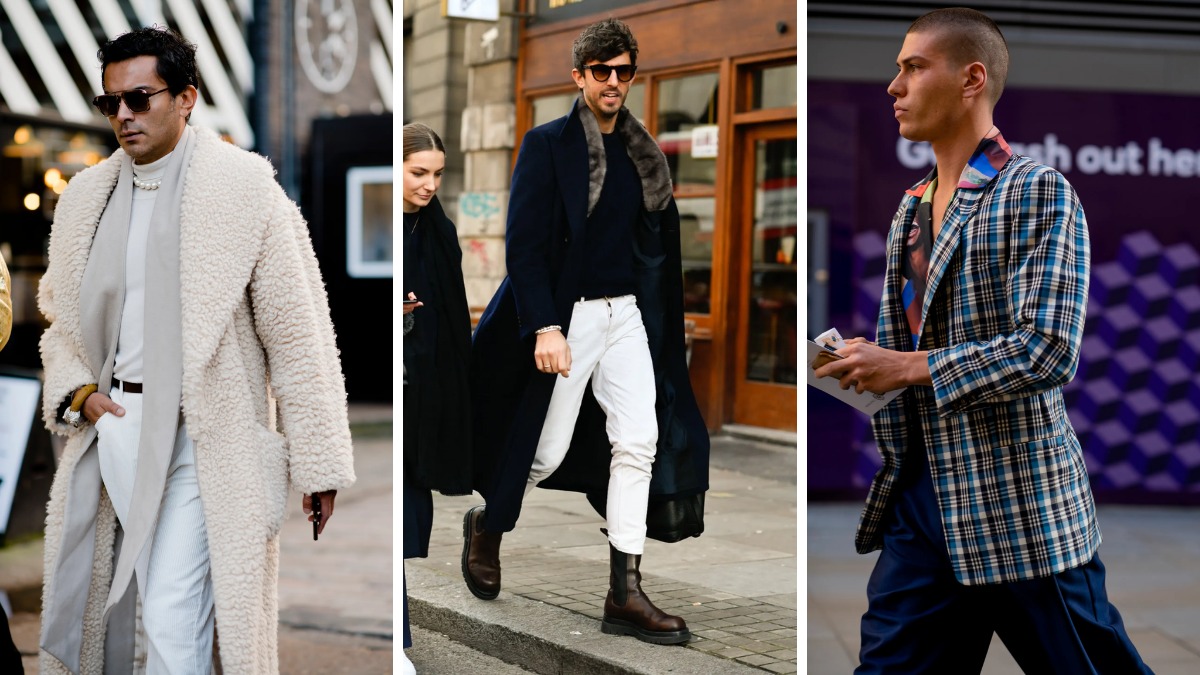 If your fortunate enough to live in any major city around the world such as London, New York, Paris etc. then attending a fashion week or fashion show will be a great starting point.

The streets are filled with people making bold fashion statements and could inspire ideas for your own personal wardrobe. Attend as a bystander without the need to stand out because we guarantee you will be outdone!

The images are filled with people being creative with their outfits and you will most certainly get ideas from this.

Brighten up your colours

As an introvert myself I tend to wear colours that allow me to blend in with everybody else and so do most people.

Which is why if you wore a bright yellow blazer down the road it would catch attention as it’s outside the norm for most people. Of course were not telling you to go to these lengths but what we are saying is that you’re best starting point is to be seen.

Bright colours does the talking so you won’t have too.

You most certainly will get stares and those that don’t have the balls to pull this off will be jealous but is it not better to be envied and hated than not recognised at all.

Those that play by the rules aren’t remembered, so live outside the box.

Don’t try to Hard (Not when to stop)

There’s a fine line between peacocking and embarrassing yourself! Therefore it’s important you know when to stop.

Everything has a time and place. Going to a social event or bar with friends then there’s nothing wrong with statement blazers, bright hats and accessories, attending something more formal then it may be best to dial it down.

Your behaviour should match (Inner Confidence)

Most importantly your behaviour should match what you’re communicating and while we hate to use cliché sayings were going to have to use one.

One of the biggest errors a man can make is being incongruent!

By wearing bright colours you have communicated overtly you have confidence and she naturally will expect this!

You don’t need bright colours to attract women, you need confidence, social skills and self-esteem. There many men who don’t practice peacocking but can regularly date because they have all these traits.

Therefore we advise that you make sure you’re confident before you go ahead with this! If you’re not confident on that level that’s fine too.

You can start out by wearing statement pieces in stuble ways. For example an all-black outfit with a bright beanie yellow hat. Something that’s not too far out the box but clear to stand out.

Our editorial features an extensive image gallery of rappers in suits with some being culture defining moments. At this point its well know that Hip Hop artists are closely associated with...

Types of Socks for Men Guide

If you're like most men, you probably have a drawer full of socks that you never seem to wear. Maybe you think buying socks is a waste of money, or...

10 Best Hats to wear with Suits

The suit is the most formal piece of garment created for men and is usually paired with specific hats in order to compliment the entire look. Therefore our editorial focuses...

Have you heard of the emos and f-boys? Well, they were a trend. After them came the e-shays and adlays. And finally, the Eboys who are originators of the Eboy...