The 80s is a decade that is often remembered for its culture defining moments such as the birth of MTV helping to shape pop culture and fashion, Michael Jackson’s Thriller release, the rise of athleisure as Nike became one of the biggest clothing brands with the help of Michael Jordan & the emergence of Hip Hop culture starting to form its identity. Men’s 80s fashion was influenced by these moments & its nostalgia continues to be sought after today.

Putting things into perspective, the term Men’s 80s Fashion has had a steady search increase as indicated below by google trends over the last decade. This data is evidence that though the 80s is over its nostalgia and fashion are still being used today as a reference point influencing our outfit choices and fashion statements. 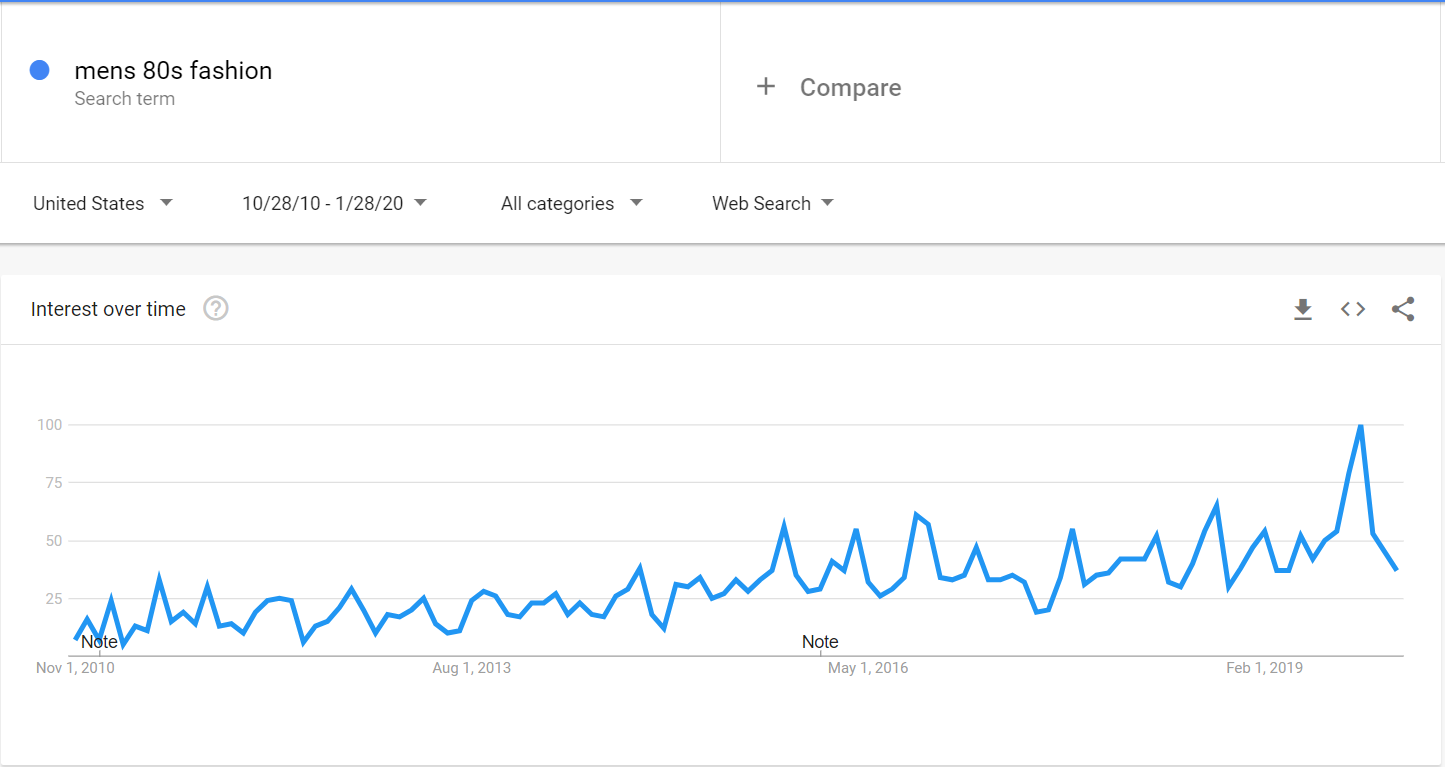 The 80s can be defined as the decade in which men made fashion statements with the use of colors, patterns, slogan t shirts, hairstyles, and subculture to intentionally break social norms. Men in the 80s did this in many ways with trends such as ripped jeans, biker jackets, Mullet hairstyles, baggy clothing, preppy fashion, and Athleisure.

Our editorial lists all the Men’s 80s fashion styles, trends, and brands in detail.

While athleisure may be popular today it has traces back to the 80s which shaped men’s fashion during this period. With brands such as Nike becoming a household name, signing Michael Jordan and the introduction of the air max 1 Men became accustomed to sportswear ranging from sweatpants, windbreakers, basketball jerseys, hoodies, and sports shorts.

Hip Hop artists during this period began to also incorporate Athleisure into their style.

The natural connection between sportswear and music culture would result in sports merchandise forming a huge part of 80s Fashion.

During 1983 the official licensing of deals with NFL, NBA & MLB allowed for merchandising which saw men supporting their respective hometown teams.

Check out the video below  from 80s Casual Classics detailing key classic Fila Vintage wear during this era. 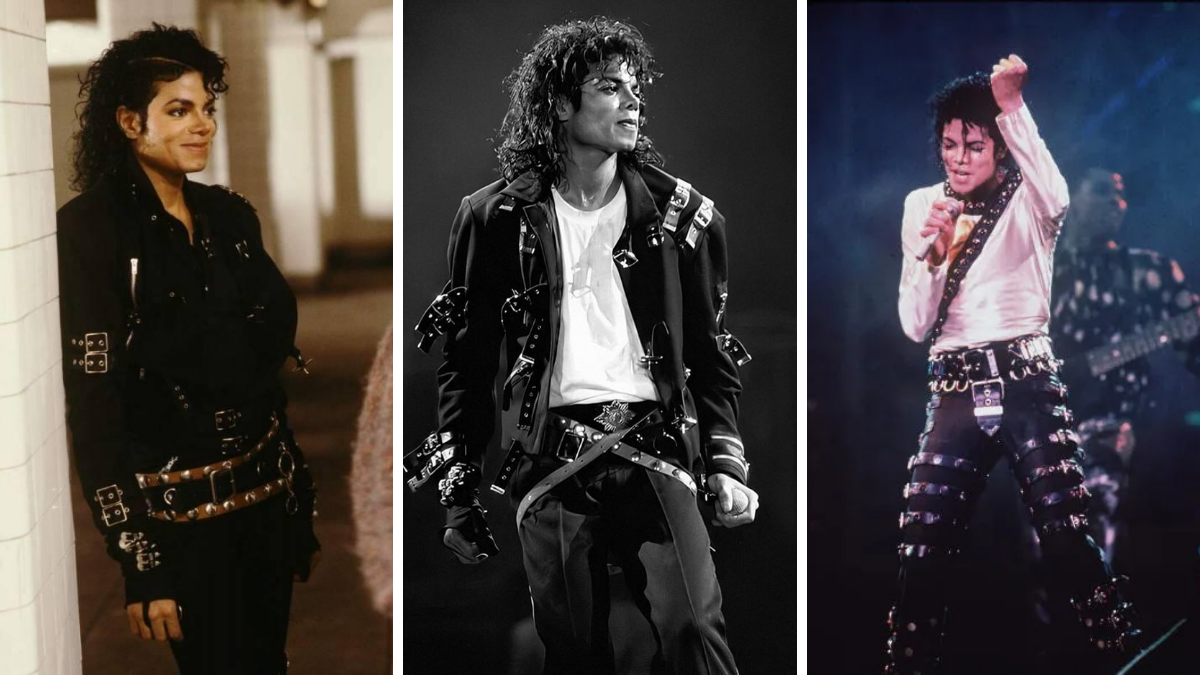 80s fashion was about making a statement which in turn meant rock culture having massive influence over the masses. Big Hair styles, leather jackets and zips, exaggerated accessories, boots, make up & headbands were prominent during this era.

The impact of 80s rock culture had clearly influenced Michael Jackson, the biggest artist at the time. Prior to the release of Bad Michael Jackson had been known for his happy clean image. In an attempt to change his public perception and look Michael took influence from rock fashion which can be seen on his BAD album cover and all throughout the 80s. 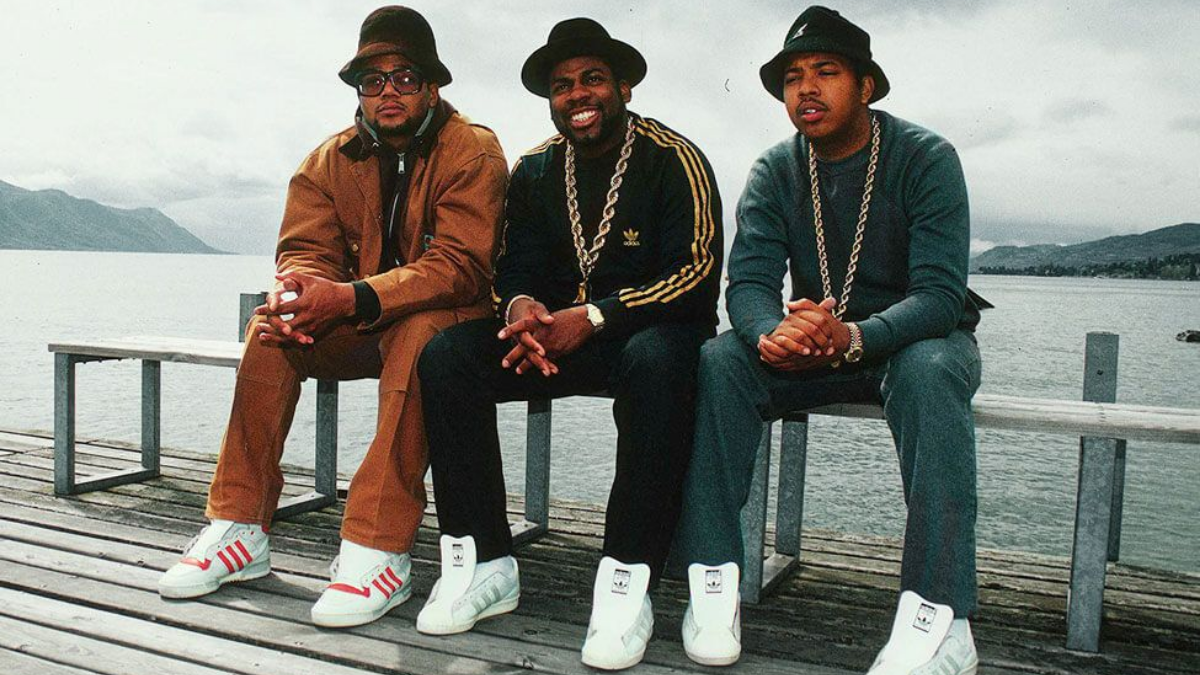 The 80s being the 2nd decade in Hip Hop culture would be the era in which the culture began to form its identity sonically and stylistically.

80s Hip Hop Fashion began to merge street, sport, and luxury fashion into one. Artists such as LL COOL J, RUN DMC, Eric B. & Rakim set precedence by dressing as the everyday individuals within the low income neighborhoods of the Bronx and throughout New York which consisted of Baseball caps, tracksuits, sportswear, baggy clothes, Air Jordan’s, Bucket hats, Rope chains and Bomber Jackets.

80s Hip Hop Fashion began to steer away from the 70s flamboyant aesthetic and Rockstar look into a more streetwear style that began to see prominence in the 80s. 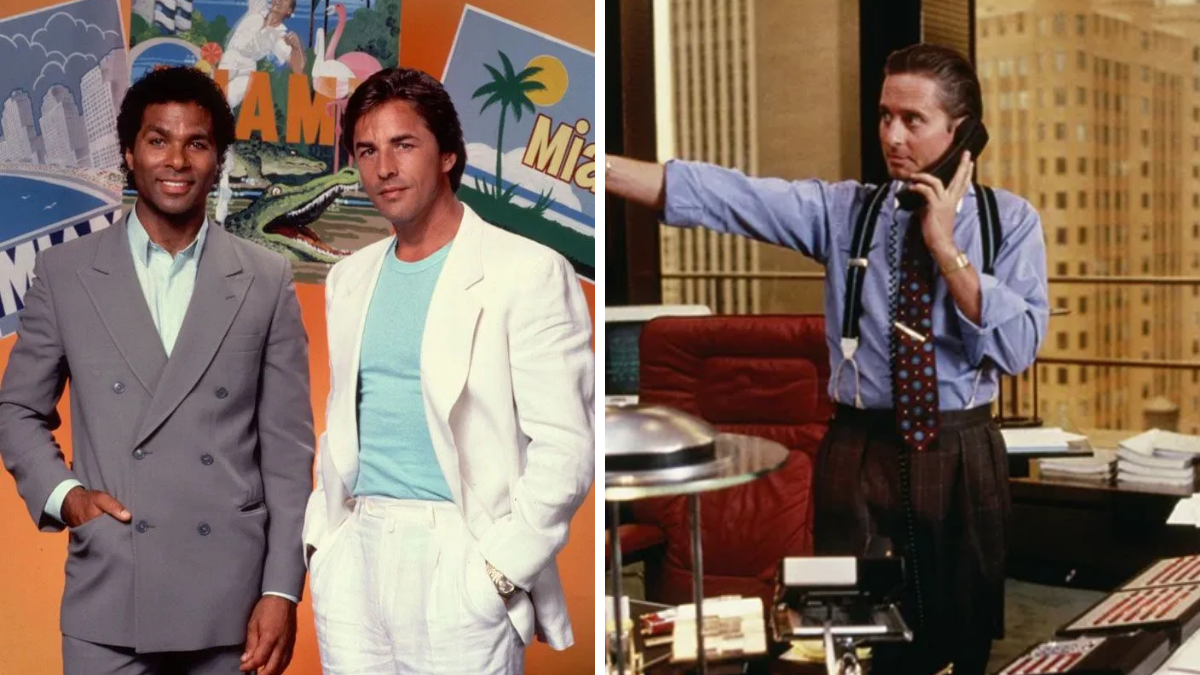 Today an 80s suit is identified by its sharp cuts, wide shoulder pads, baggy fit and pattern. The big bold look was not only reserved for casual outfits, men during this period made it a habit to style formal entire in the same manner.

The main stars Don Johnson and Philip Michael Thomas set the tone for t-shirts and baggy linen suits. As the saying goes “life imitating art” is clearly the case with Miami Vice, the success of the TV series was clear as the scope of Men’s 80s fashion had clearly influenced the masses. 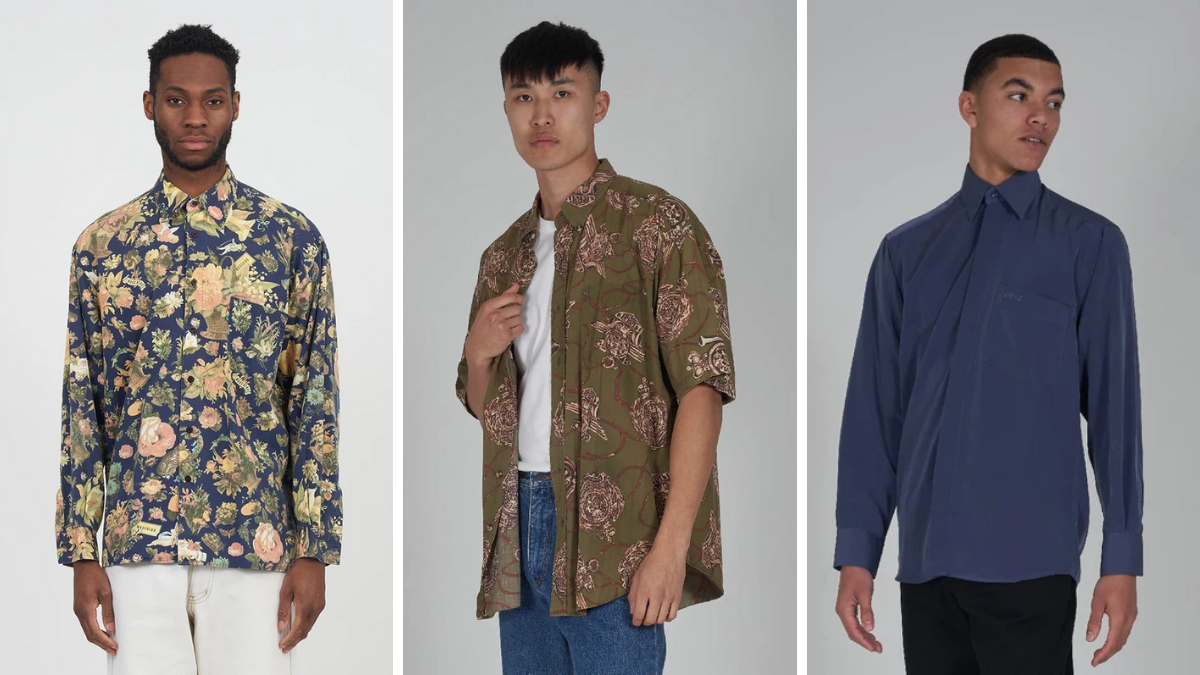 For a more formal look men during this period styled banker or pinstripe shirts, while casual shirts were usually loosely fitted, colorful & printed.

These have evolved since then however we can still see influence of the 80s casual shirts today.

While we presented data demonstrating our google search interest towards Men’s 80s fashion, high luxury fashion houses understand this and continue to serve us with quality pieces.

Brands such as Gucci, AMIRI & Louis Vuitton understand the value of nostalgia and retro garments which is why they continuously bring back shirts mimicking the 80s style from printed floral shirts to flat collars. 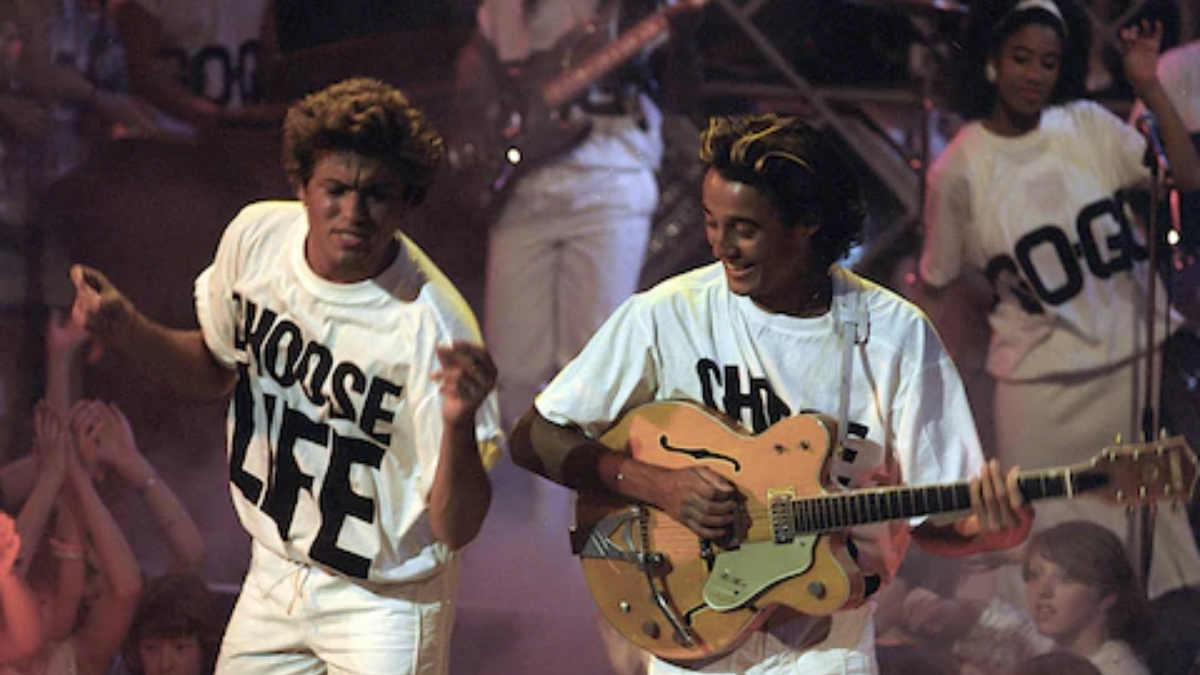 As sports merchandise began to grow during the early 80s it was only a matter of time that brands outside of sport would begin to replicate similar designs with a twist, SLOGANS!

For the everyday person interested in sport or not slogan t shirts became a way of self-expression. Individuals used their t shirts to communicate their personal hobbies, interests & pop culture moments. The t shirt also became another way to connect with other people who identified with the slogan message.

The only thing that mattered was the message or image being visible! 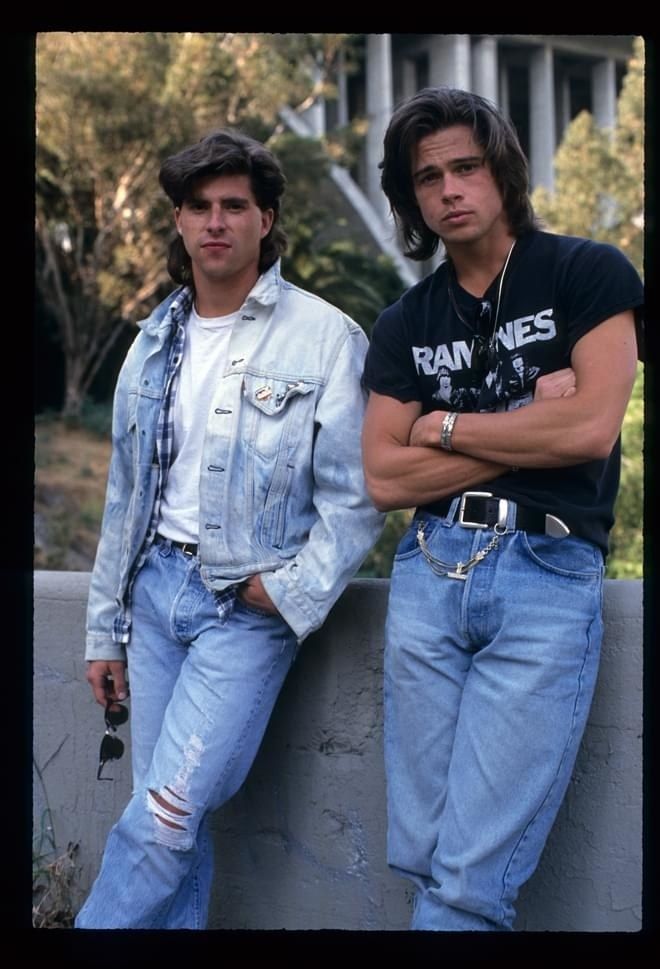 Though denim was initially crafted as workwear the 70s & 80s saw men begin to incorporate the fabric as part of their everyday lives.

This was often time reinforced in subcultures such as Grunge Music. The lovers of the genre wore denim jeans as apart of a uniform look whilst also benefitting from its practicality.

Denim jeans were becoming a way of life during this period and it was becoming evident by men choosing to sport them as casualwear. 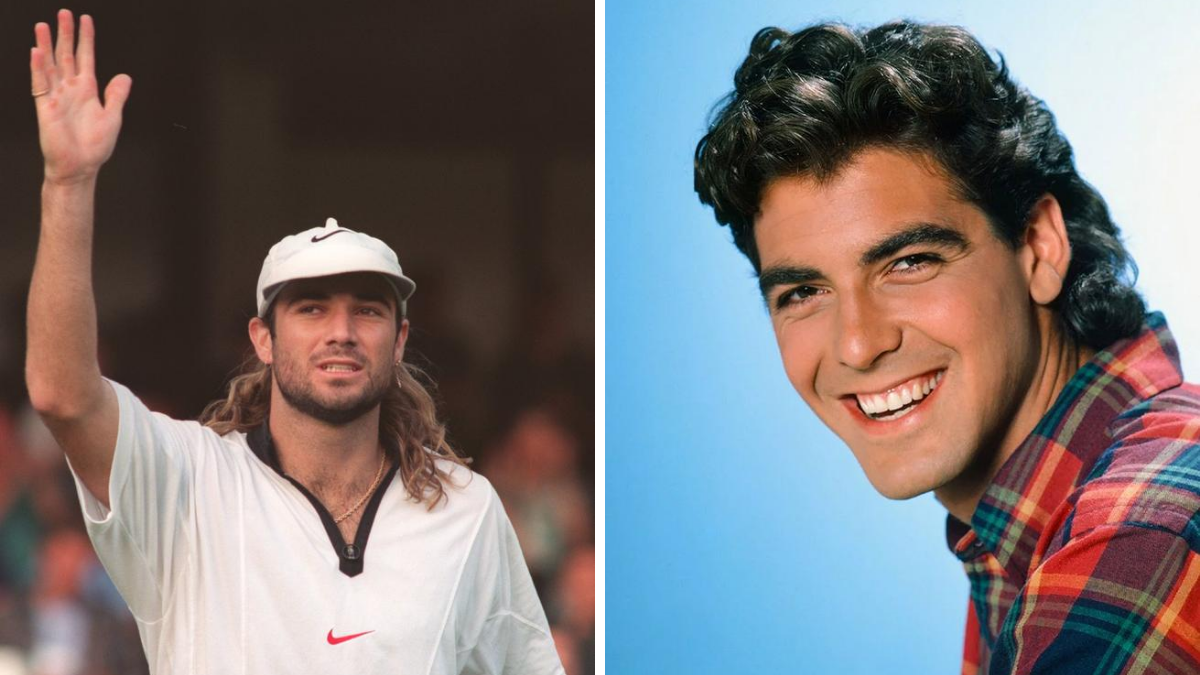 Hate it or love it the Mullet hairstyle ruled the 80s & while it may receive hate & criticism today it was the uniform look amongst men in the 80s.

Often described as “Business Up Front, Party In The Back” for hair being short at the front and side while being long at the back.

The style was introduced to many by David Bowie in the 70s & the tradition kept alive throughout the 80s by stars such as Rob Lowe, George Clooney, Charlie Sheen & Billy Ray Cyrus amongst others. 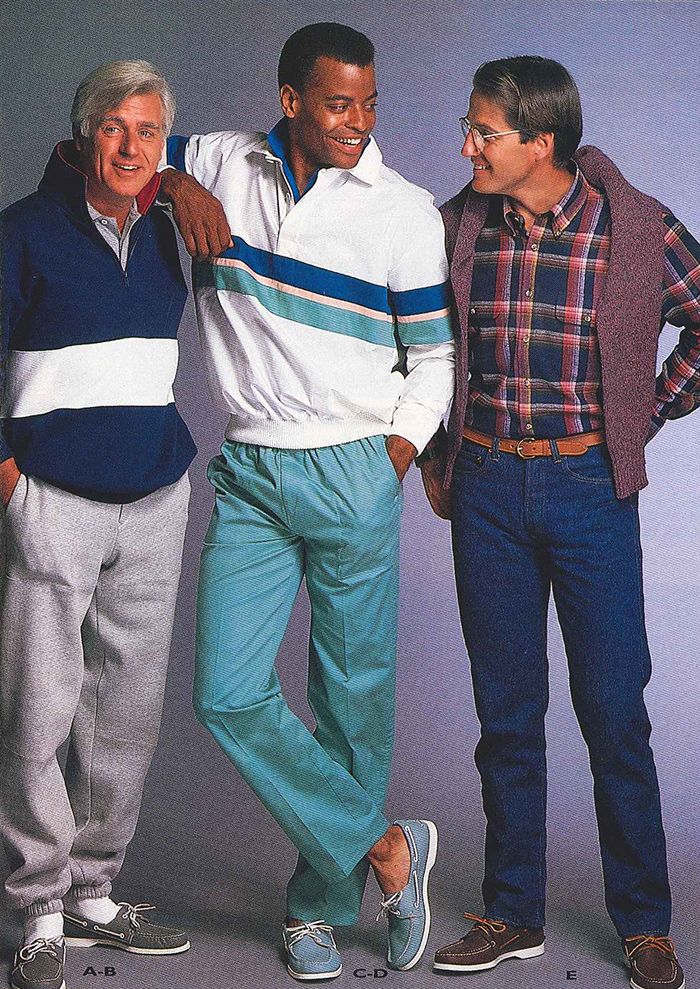 While young men in the 80s could be sectioned into subcultures for the way they dressed from punk, rock, grunge to hip hop, preppy fashion filled the void for those individuals who did not identify with these subcultures and instead dressed in accordance with their wealth and status.

“Preppy is a style that was originally adopted by privately educated students from High Income families – the upper-middle-class American – and worn at Ivy League universities that symbolized old money,”

When we think of preppy fashion, we automatically think of Carlton Banks and his most notorious looks from sweaters that men wore over their shoulders, polo shirts, slacks, and boat shoes.

How Should Jeans Fit?

Our editorial features an extensive image gallery of rappers in suits with some being culture defining moments. At this point its well know that Hip Hop artists are closely associated with...

Types of Socks for Men Guide

If you're like most men, you probably have a drawer full of socks that you never seem to wear. Maybe you think buying socks is a waste of money, or...

10 Best Hats to wear with Suits

The suit is the most formal piece of garment created for men and is usually paired with specific hats in order to compliment the entire look. Therefore our editorial focuses...

Have you heard of the emos and f-boys? Well, they were a trend. After them came the e-shays and adlays. And finally, the Eboys who are originators of the Eboy...