With a Receding hairline, bald spots and what appears to be unbrushed hair there’s no surprise Kevin Durant Hair continues to make the headlines all throughout sports media.

Despite his athletic abilities, career stats and talents the world just can’t seem to move past his hair and for good reason!

Our editorial covers his hair type, why his hair appears unkempt as well as his decision to grow it out, bad choice Kevin! Bad Choice!

To understand why Kevin Durant’s hair appears unbrushed we need to first understand his hair type. From the image below we can see his hair is 4C which is the tightest pattern of its category as well as every other hair type. 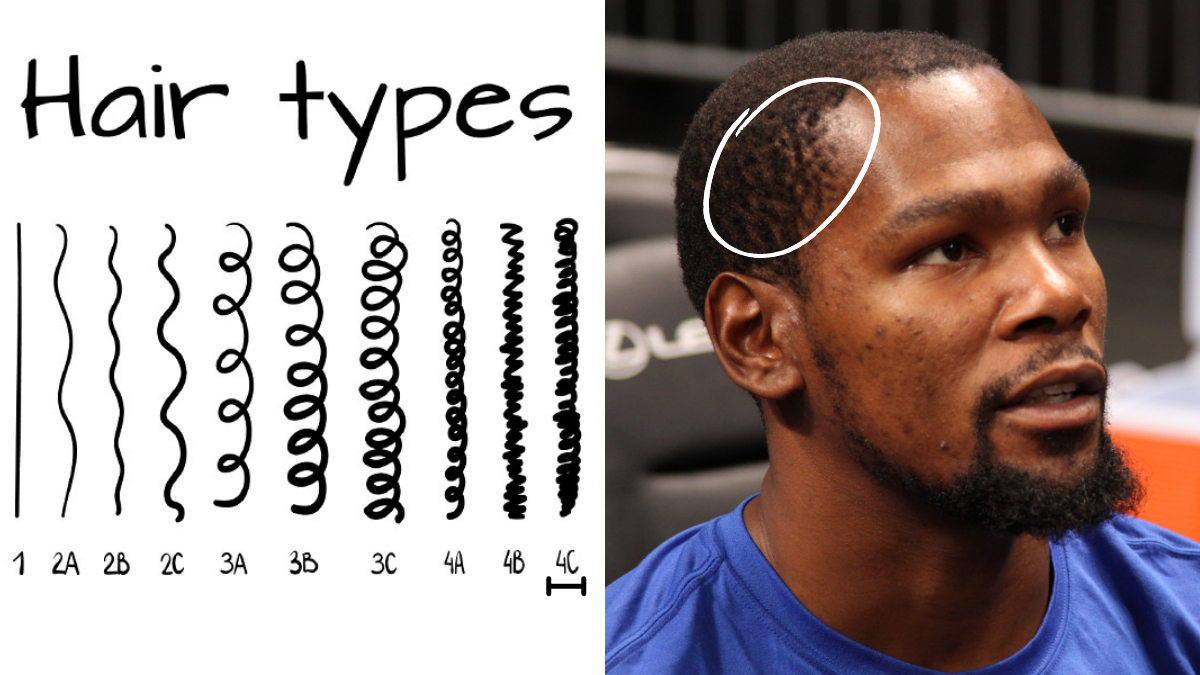 So when the question comes up which is, “Does Kevin Durant brush hair?” The answer is yes, however its quite easy for this hair type to naturally coil back which creates the unbrushed look.

He has also gone on the record stating sometimes he rolls out of bed and heads straight to the game! I guess at this point hes not as bothered about his appearance.

Most importantly we must state that not everybody with 4C hair experiences this!

Kevin Durant’s going bald were the headlines across all sports media platforms and social forums. 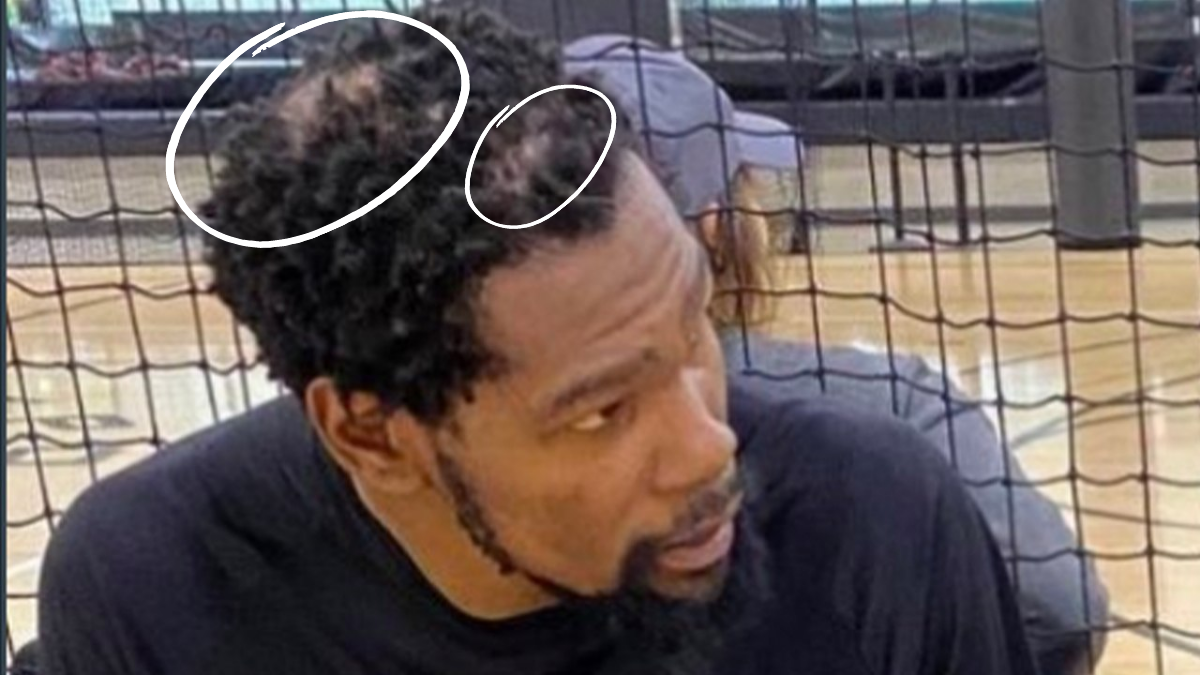 With the athlete deciding to grow out his hair his thin crown became much more apparent and his bald spot seems to have been developing for quite some time too.

What’s even more interesting is that some of the best NBA players to ever step on the court and play the game have gone bald so he’ll be amongst an elite class of players who opted for the bald look if he cuts it.

At this point you may be wondering why doesn’t Kevin just shave his hair? For the same reason most men hold onto what’s left, it gives them a youthful appearance, it’s their identity and they have an attachment to it like everybody else.

As every individual is unique with a different hair type we also see multiple different hairline shapes. In Kevin’s case we see his M shaped hairline. 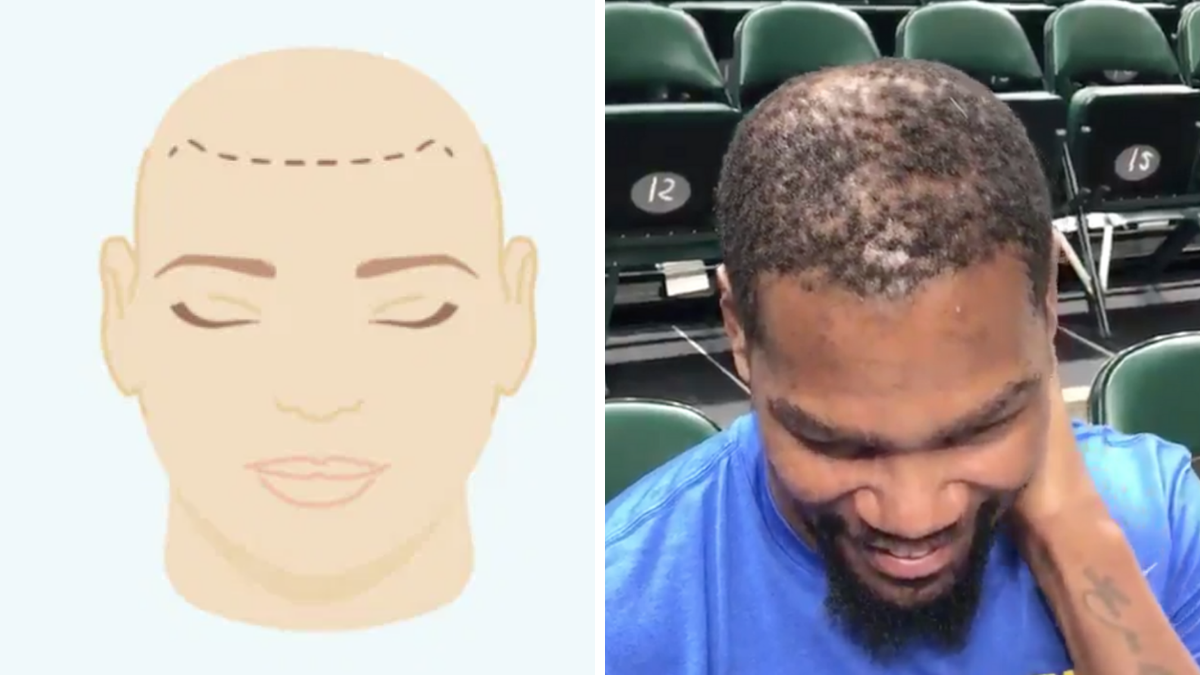 An M-shaped hairline is linked with a receding hairline, a form of hair loss, which in turn is linked to a variety of different factors such as stress, age, hormone levels or simply just genetics.

A healthy diet filled with nutrients like protein can help preserve your hairline, however when you’re already a fit athlete with an active lifestyle it most likely comes down to stress levels, age or hormones.

We can’t say for sure what it is in Kevin’s case but it will be one of the many things listed.

What Should he do?

Whilst the world continues to troll Kevin Durant for his hair issues were going to be more empathetic towards him!

Balding is a very sensitive issue for men and women alike, therefore were not going to just say cut it, rather were going to list all available options for him to partake in and if those aren’t successful then maybe the big chop is necessary

The good thing is he doesn’t seem to take personal attacks and trolling too seriously, therefore he should be ok! Like we previously said though, should he decide to go bald he will be amongst of the best NBA players who decided to do so!

The only reason were giving Kevin Durant hair this much attention is because he refuses to cut it which draws global attention to it!

Let’s be real the hair issues above aren’t just reserved for Kevin Durant, men across the world experience this! No one is special

This may sound like common sense but if you have a similar hair type your best to keep a comb and brush with you. Don’t excessively comb your hair but ensure you do brush it every morning afternoon and night.

Nutrition is the best indicator for hair health which is why we advise you continue to eat protein, healthy fats and limit process foods.

Notice that we didn’t tell you to cut your hair! That’s because this is a personal choice and one we want you to decide for yourself.

If hair thinning is bothering you seek professional help to get options for what to do next! That’s your best course of action!

The Evolution of Lil Wayne Dreads