For those of you posing the question “Is Pop Smoke related to 50 cent?” the answer is No, Pop Smoke and 50cent weren’t related.

It’s well documented that 50 cent quickly took a liking into Pop Smoke as an artist, while Pop Smoke went on to demonstrate his love and appreciation for 50 cent often citing him as his main musical influence.

Why the Misconception exists

Is Pop Smoke related to 50 cent? is a legitimate question when you factor in both artists are named Jackson (Pop Smoke name – Bashar Barakah Jackson & 50 Cent name – Curtis Jackson) Both artists from new York, born in July, and are African American. We can understand how the consumer can begin to form these questions.

In addition to the countless amount of similarities  Pop Smokes attitude, demeanour and style has a similar feel to early 50 cent during his debut into the music Business. For that reason alone people have wondered if the 2 are blood relatives.

Similar misconceptions have always occurred within Hip Hop culture, take Nipsey Hussle and Snoop Dog for example. At the time of Nipseys come up the audience was convinced he was related to Snoop. Everything from his height, hair, sound and style gave you an early Snoop Dog feel.

Another reason why this misconception may exist is due to Pop Smoke respecting 50 in the highest regard which could be perceived as a father/son relationship. In interviews 50 expressed Pop smoke being an attentive listener wanting to learn from the veteran.

So while 50 cent and Pop smoke aren’t blood related these above factors should explain why people have believed so for years.

Their Relationship whilst alive & Sampling 50

During an interview with Billboard 50 went on to say his music should in fact be re done to fit the contemporary music out today. Who better than Pop Smoke to deliver!

“When I met [Pop Smoke], I told him, it was time to do my records over,” 50 Cent tells Billboard regarding Smoke’s flip on “Many Men” for his anthemic track “Got It on Me.” “Those [first two albums of mine] are [from] ’03 and ’05. If there’s something that struck a chord in you and its dope, the new artist is supposed to use that or make their version of it.”

50 told Pop that if he stayed focused he could achieve the same level of success. “You could either continue down that path and there’s a high chance that you’ll end up in jail or dead, or you can do this.”

It’s no surprise to us that the quality of his music set the tone for the city of New York. Pop Smoke was hungry for success and with 50 in his corner there was no stopping him. He is widely credited for taking the new york drill scene into the masses and we believe a more focused Pop Smoke would form infront of our eyes due to his relationship with 50 cent. 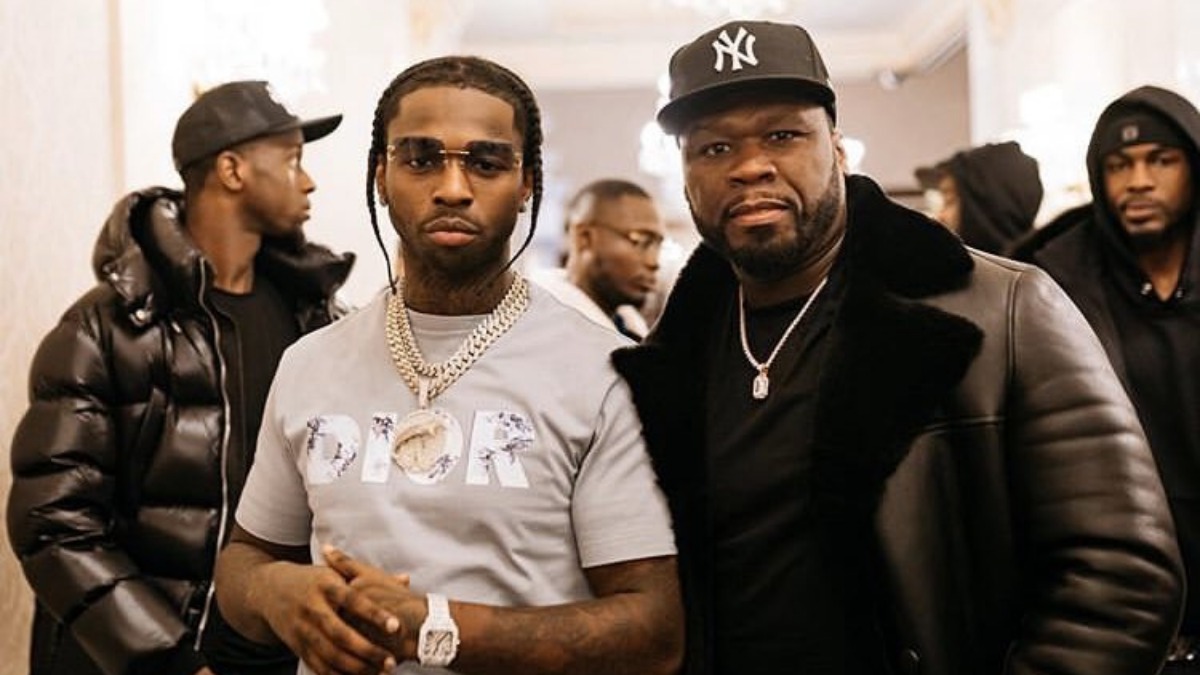 Its apparent that Pop Smoke’s legacy lives on with his streaming numbers increasing, consumers still playing is music socially and artists giving him praise for his work on the New York Drill scene.

More importantly the best efforts to keep his legacy alive was 50 cent deciding to take control of his album after his death. 50 committed himself to executive produce the album following his murder. During this time 50 used his influence and connections to get featured artists on songs, ensure deadlines were met and take Pop Smokes mother to an award show.

All of which was achieved within a few months.

So while 50 and Pop Smoke were not related its evident to see 50 cared for him as a son and took ownership to control his music legacy, resulting in hit songs such as the woo and others.

The album shoot for the stars, aim for the moon has been deemed a success. Gaining billboard 200 success upon release, selling over 251,000 total album-equivalent units in its opening week. The album was so well received 50 has been thanked by the Hip Hop community for taking this in his hands and creating the best piece of work!